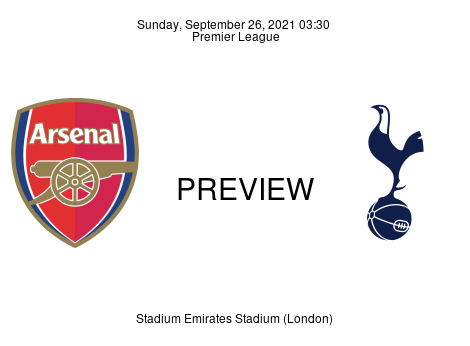 The North-London Derby, Arsenal F.C. vs. Tottenham Hotspur F.C., kicks off at 16:40 (GMT+1) on Sunday, September 26, at the 60,704-capacity Emirates Stadium. Craig Pawson will be in charge while Ian Hussin and Dan Robathan will be the assistants. Meanwhile, Stuart Attwell will be sitting in the VAR room throughout the length of the game.

Preview After a rough start to the season, Arsenal appear to be making much-anticipated positive strides on the field, picking up back-to-back victories after another narrow 1-0 win over Burnley on Matchday 5. Martin Odegaard (30') scored the only goal of the game at the half-hour mark to hand Arsenal their second victory of the season. On Wednesday, Gunners fired three past AFC Wimbledon in the third round of the EFL Cup, with Lacazette (11' P.), Emile Smith Rowe (77') and Eddie Nketiah (80') all on the score-sheet. Arsenal have the Premier League form: LLLWW, and remain in 13th place, while having 6 points after 2W, 0D, & 3L. Gunners have an average of 0.4 goals per game, having scored two goals in five Premier League games. Gunners conceded a tally of 9 goals (1.8 goals per game) and have a G.D. of -7. For the first time since the 2013/14 season, Arsenal will be aiming for consecutive Premier League victories over Tottenham Hotspur. A 4—2—3—1 formation with Lacazette in attack is expected against Spurs on Sunday. Arsenal were handed a boost with the recent return of Thomas Partey. Furthermore, an official statement from the club's website read: all players in the men’s first-team squad are currently fit and available for selection.

Preview Nuno Espírito Santo sent his former team crashing out of the EFL Cup on Wednesday after Spurs advanced into the next stage ahead of Wolves following penalties. However, last weekend, Spurs picked up a 3-0 defeat to Chelsea. Lackluster and unimpressive, Spurs had only two shots on target against Chelsea's ten. Goals from Thiago Silva (49'), N'Golo Kante (57') and Antonio Rudiger (90'+2) saw Spurs pick up the embarrassing defeat. Having 9 points from 3W, 0D, & 2L, the club tumbled down to 7th place on the table while having the form: WWWLL. Spurs have scored only three goals this season, after five Premier League games. - An average of 0.6 goals scored per game. Having conceded six times, Nuno's side has a G.D. of -3 and an average of 1.2 goals-conceded-per-match. Nuno Espírito Santo could emerge alongside Spurs with the 4—3—3 formation with Kane in the middle, while Dele Alli and Heung-min Son could appear on the flanks. With 11 goals, Harry Kane is the highest goalscorer in the history of the North London Derby.