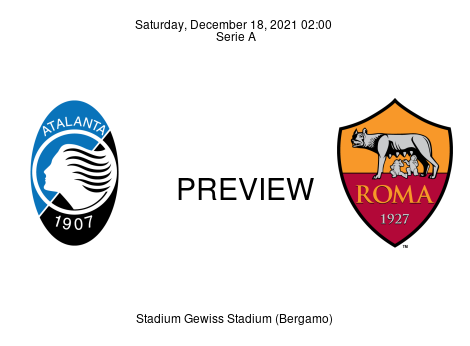 The Goddess returns, having visited her wrath upon the Yellow and Blues, setting her gaze on the Magic One, led by the Special One. Atalanta B.C. vs. AS Roma kicks off at 15:00 (GMT+1) on Saturday, December 18, at Gewiss Stadium.

Preview Verona's Giovanni Simeone (22') took his goal tally to 12 Serie A goals, having bagged the opener midway through the first half in the game against Atalanta, leaving the Goddess with a one-goal deficit to deal with. Minutes later, Miranchuk (37') found the leveler and restored parity at the Stadio Marcantonio Bentegodi. Minutes after the break, the Dutchman, Teun Koopmeiners (62'), struck, leaving Atalanta with the lead until full-time. Gli Orobici has a quintet of victories, WWWWW, ahead of Saturday's fixture against Roma, having moved up a spot, from 4th to 3rd place on the Serie A table. La Dea trails second-placed Milan [39 points] by two points, after picking up 37 points from 11W, 4D, and 2L. With Milan taking on Napoli [36 points] over the weekend in another difficult fixture, Atalanta could move into second place should they defeat the Little Cubs on Saturday. After being sunk in a 3-2 defeat to the Yellow Submarine in the UEFA Champions League, which saw the Black and Blues exit the star-studded arena of champions, Gian Piero Gasperini switched from the 3—4—1—2 formation to its variant, the 3—4—3, for the game against Verona. The latter is expected to remain in place for Saturday’s fixture, with Duván Zapata expected to return to the starting line-up. The Columbian made an off-the-bench appearance in the 56th minute of the game against Hella Verona.

Preview AS Roma moved one spot ahead on the Serie A table, from 7th to 6th place, having bagged a comfortable 2-0 win over Spezia on Monday. I liked the two goals from corners because yesterday we trained on set pieces for 25 minutes, Jose Mourinho said. I like the result, not the game. It was not a difficult match. Starting from the first half, we gave away and lost a lot of easy balls. We never had good ball circulation. At that moment, it was not difficult to play against Spezia, he added. The Special One aims for at least a draw in this difficult fixture against Atalanta in a bid to continue the slow but steady climb up the Serie A table. The She-Wolf has 28 points from 9W, 1D, & 7L, having returned to winning ways after back-to-back defeats: WWLLW. José Mourinho and the Giallorossi mirrored Spezia’s 3—5—2 formation in Monday’s game against the latter, but could revert to the 3—1—4—2, with Nicolò Zaniolo and Tammy Abraham in front on Saturday. Felix Afena-Gyan (R. 90’+3) picked up a red card against Spezia and is suspended for this game.