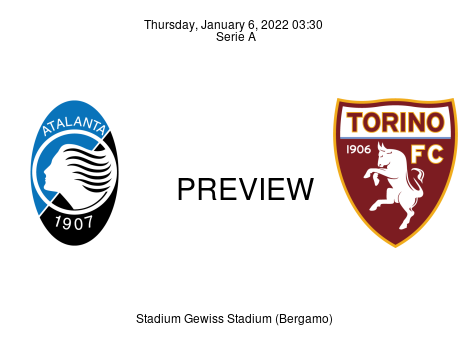 The Goddess returns for her first game of the new year, later this week, against II Toro, looking to pick up three points in a bid to break into the top three. Atalanta B.C. vs. Torino F.C. kicks off at 16:30 (GMT+1) on Thursday, January 6, at the Gewiss Stadium.

Preview After the 4-1 defeat to AS Roma, Atalanta were looking to bounce back to winning ways but were held to a goalless draw by relegation-troubled Genoa at the Stadio Luigi Ferraris. Despite several clear-cut chances, both sides failed to find the back of the net on either side of the forty-five. The draw leaves the Bergamo-based side with 2 points per game in the last five Serie A matches, WWWLD, and in 4th place, one point adrift of the top-three section. The Black and Blues have 38 points from 11W, 5D, & 3L. A win on Thursday could see the Goddess topple third-placed Napoli, who have a difficult fixture against Juventus later in the day. I Nerazzurri reiterated their intentions for a top-three finish, having wasted no time in strengthening their squad in the January transfer window following the acquisition of Sassuolo’s Jeremie Boga. Boga was pictured having his medical with Atalanta earlier this week, following a €22M-rated move as the club’s most expensive signing. An announcement over the acquisition of the 25-year-old Ivory Coast international is expected before the weekend. However, an appearance in the club’s colors remains far. A 3—4—2—1 formation with Duván Zapata at the top of the shape is expected from Gian Piero Gasperini for this fixture against Torino. Meanwhile, Remo Freuler is suspended for this fixture.

Preview Torino failed to pick up a point following the narrow 1-0 defeat to the Old Lady before the Christmas break. Denzel Dumfries (30') scored the only goal of the game at the half-hour mark. The defeat saw the club move one spot down, from 10th to 11th place on the Serie A table, having picked up 25 points from 7W, 4D, & 8L. II Toro have amassed 1.6 points per game in the last five Serie A fixtures, a total of 8 points from a possible 15: DDWWL. Ivan Juric could mirror the 3—4—2—1 formation with the contract-rebel and skipper, Andrea Belotti in attack. According to the club's president, Belotti is expected to leave the club at the end of the season. I think Belotti will leave Torino without letting us earn anything, Urbano Cairo said in an interview with La Stampa earlier this week. The 28-year-old is linked with a move to AC Milan, but Toronto FC are said to be monitoring the situation.