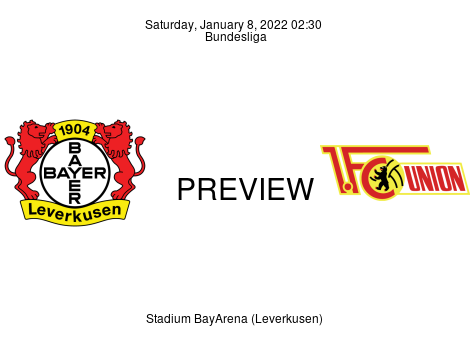 The Company’s Eleven return for their first game of the new year, aiming to pick up three points in a bid to break into the top three. Bayer 04 Leverkusen vs. 1. FC. Union Berlin kicks off at 15:30 (GMT+1) on Saturday, January 8, at BayArena.

Preview Right before the winter break, Bayer Leverkusen picked up a 2-1 defeat to SC Freiburg at the Europa-Park Stadion. Three minutes after the half-hour mark, Vincenzo Grifo (33' P.) put Freiburg in front from the penalty spot. But Charles Aranguiz (45'+1) put Leverkusen back on level terms right at the stroke of half-time. It appeared both sides would settle for a draw. However, Kevin Schade (84’) struck deep in the second half, leaving Freiburg in front, and Leverkusen unable to find their way back, with six minutes left on the clock. It was Leverkusen's second defeat in five Bundesliga games: WWLDL. The loss saw the club drop one spot lower on the Bundesliga table, as they moved from 3rd to 4th place, having failed to pick up a point. The Company’s Eleven have 28 points from 8W, 4D, and 5L. Right before Christmas, Gerardo Seoane adopted a Christmas tree formation [4—3—2—1] for the game against Freiburg, leaving Patrik Schick in attack. A similar shape, with the 25-year-old at the top of the design, is expected for this fixture against Union Berlin. On availability, Aranguiz (calf), Baumgartlinger (knee), and Kossounou (Africa Cup of Nations) will not be available for this fixture. Meanwhile, Fosu-Mensah's availability remains shrouded in mystery due to match fitness.

Preview Before the winter break, FC Union Berlin picked up a 1-0 win over VfL Bochum. Max Kruse (16') bagged the only goal of the game inside the first twenty minutes at the Vonovia Ruhrstadion. The win saw Union Berlin move one spot up, from 8th to 7th place on the Bundesliga table, having picked up 27 points from 7W, 6D, and 4L. The club has a form that reads: LWLDW, ahead of this fixture against Bayer Leverkusen. A win here could see Union Berlin take a step into the top six if favorable outcomes emerge at the end of the weekend. In the game against Bochum, Urs Fischer had the Iron Ones beaten into the shape of a 3—4—1—2, with Sheraldo Becker and Nigeria’s Taiwo Awoniyi [now unavailable due to AFCON] in attack. Max Kruse, who was positioned behind the duo, is expected to move into attack, filling up for the absent Awoniyi, while Kevin Behrens is expected to take Sheraldo Becker's place. Becker and Paweł Wszołek (COVID-19) failed to travel with Die Eisernen for the trip to BayArena.