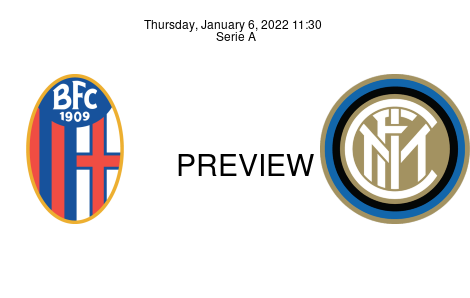 With the omicron variant fueling a new wave of COVID-19 pandemic, I Rossoblù returns after the Christmas break, following a three-goal haul against the Watermelon Peel in December last year. Bologna FC 1909 vs. Inter Milan kicks off at 12:30 (GMT+1) on Thursday, January 6, at the Stadio Renato Dall’Ara.

Preview Last time out, Bologna picked up a 3-0 win over Sassuolo at the Stadio Città del Tricolore. The Black and Greens were the ones on the front foot, forcing a number of saves from Bologna's Łukasz Skorupski in the opening minutes. But it was the Red & Blues who struck first after a remarkable ball over the top from Marko Arnautović found Riccardo Orsolini (36’). One minute before the stroke of half-time, Aaron Hickey (44') struck for Bologna’s second, firing over a sea of black and green shirts. Dominant, Bologna came knocking on three more occasions before they eventually found the third through Santander (90'+4), after a gift from Sassuolo's goalkeeper, Gianluca Pegolo, inside added-time. Having returned to winning ways, WLLLW, I Rossoblù moved two steps up, from 12th to 10th place, with 27 points from 8W, 3D, & 8L. Siniša Mihajlovic is expected to keep the 3—5—2, following the impressive performance against Sassuolo. A Riccardo Orsolini - Marko Arnautović pair is expected in attack for this fixture against Inter Milan. Meanwhile, a surge in COVID-19 numbers will see the Renato Dall'Ara filled only to 50% capacity, with social distancing a priority. Meanwhile, Bologna could be without Aaron Hickey for this fixture, and three others due to positive COVID-19 PCR tests.

Preview The Well-Cherished One picked up a 1-0 win over Torino in their last Serie A appearance in December [2021]. A well-executed counter-attack had II Toro racing back desperately to cover their lines. But little could be done to stop Denzel Dumfries (30') from hitting the back of the net, leaving Inter Milan with the lead half-an-hour after kick-off. Despite a few more clear-cut chances, Il Biscione failed to convert. The win leaves Inter Milan at the top with 46 points, four points clear of title hopefuls AC Milan [42 points], after 14W, 4D, and 1L. The Serie A champions are returning with five straight victories: WWWWW, ahead of this fixture against Bologna. Simone Inzaghi has a 68% win rate [25G: 17W, 5D, & 3L], and aims to see the numbers improve at the end of this trip to Bologna. I Nerazzurri will appear in the familiar 3—5—2 formation once again, with Lautaro Martínez and Alexis Sánchez in attack. Edin Džeko (COVID-19) remains on the list of possible absentees, alongside Joaquin Correa (hamstring), while Hakan Calhanoglu is suspended. In other related news, Aleksandar Kolarov and Matias Vecino are set to depart the club this month in a bid to find more playing time.