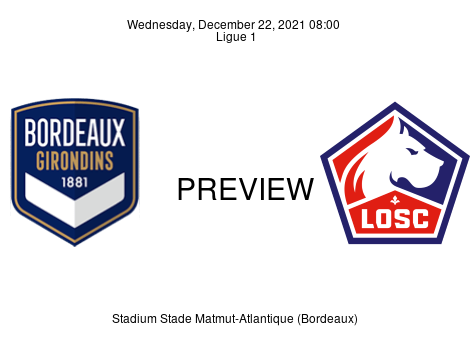 The Ligue 1 fixture, FC Girondins de Bordeaux vs. Lille OSC, kicks off at 21:00 (GMT+1) on Wednesday, December 22, at the Matmut Atlantique.

Preview On Sunday, Bordeaux picked Les Jumeaux M'Zouasia AS to pieces in an embarrassing 10-0 French Cup win at the Nouveau Stade de Bordeaux. On Ligue 1 Matchday 18, Bordeaux picked up a 2-1 win over Troyes at the Stade de l'Aube. Both sides had several clear-cut chances in the opening minutes, but it was Troyes’ Xavier Chavalerin (28’) who found the back of the net first to give his side the lead. Two minutes later, an own goal from center-back Yoann Salmier (30 O.G.) saw Bordeaux back on level terms. Minutes after the break, a remarkable header from Hwang Ui-jo (54’) saw Bordeaux take the lead until the final whistle. The victory saw the Marines and Whites return to winning ways after four games without a victory: DLLDW. With the win, Bordeaux jumped two spots higher on the Ligue 1 table, moving from 17th to 15th place at the end of Matchday 18. The Marines and Whites have amassed a total of 17 points from 3W, 8D, and 7L. Bordeaux has a goal ratio of 1.56 g.p.g. this season, having scored 28 goals in 18 Ligue 1 games. At the defensive end, the club has conceded 40 goals (2.22 goals conceded per game), - the league's worst record, and have a G.D. of -12. A 4—2—3—1 formation with Hwang Ui-jo at the top of the shape is expected from Vladimir Petkovic for this game against Lille on Wednesday. On availability, Paul Baysse (ACL injury) is ruled out for the rest of the year.

Preview Lille remained in 11th place following the goalless draw against Lyon on Matchday 18. Over the weekend, LOSC defeated Auxerre, 3-1, in a French Cup fixture at the Stade Pierre-Mauroy. Lille have amassed 25 points from 6W, 7D, and 5L, and are unbeaten in five Ligue 1 games: DDWWD, ahead of this fixture against Bordeaux. The Ligue 1 champions are far from mounting a title challenge, but Jocelyn Gourvennec continues to make frantic efforts to steer the club out of the mid-table section. A win here could see Lille inside the top-ten at the end of the midweek round of fixtures. The club has scored 23 goals (1.28 goals scored per game) after 18 Ligue 1 games. At the other end, Les Dogues have conceded 24 goals (1.33 goals per match) and have a goal difference of -1. Jocelyn Gourvennec’s 4—4—2 formation would see Burak Yilmaz and Jonathan David in attack once again. David is Ligue 1’s top scorer with a haul of 11 goals to his name. Meanwhile, Timothy Weah (muscle injury) remains doubtful for this fixture.