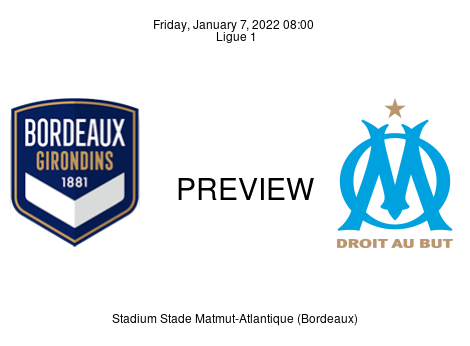 The League of Talents returns this weekend with the fixture between the Marines & Whites and the Olympians, taking center stage as the forerunner of Ligue 1’s Matchday 20. A quick review of the events before the winter break leaves us with 188 games played and 531 goals scored. Jonathan David is the league’s top-scorer with 12 goals, while Mbappe sits at the top of the assists list with a haul of eight to his name. Goalkeepers Pau López (Marseille) and Alfred Gomis (Rennes) have the highest number of clean sheets (8). PSG remains at the top of the table with 46 points, 13 more than their nearest rivals, OGC Nice, while Saint-Étienne is at the bottom with 12 points and no victories in five games. FC Girondins de Bordeaux vs. Olympique de Marseille kicks off at 21:00 (GMT+1) on Friday, January 7, at Matmut Atlantique.

Preview Bordeaux will be making their return after the 3-0 defeat to Brest in the French Cup [Round of 32] last Sunday. Before that game, the Girondins picked up a 3-2 defeat to LOSC Lille right before the winter break on home soil. Bordeaux has amassed only 4 points out of a possible 15 in the last five league games: LLDWL. Following the defeat to Lille, the club slipped two spots down the table, moving from 15th to 17th place. In total, Bordeaux has 17 points from 3W, 8D, and 8L. An unlikely win here could see the Girondins regain lost ground, but a defeat would send Bordeaux spinning further down the table into the relegation zone. On the numbers, the club has a goal ratio of 1.6 g.p.g. this season, having scored 30 goals in 19 Ligue 1 games. However, a huge deficit, in the shape of 43 goals conceded [an average of 2.3 goals conceded per game], leaves the club with a G.D. of -13. A 4—2—3—1 formation, with Hwang Ui-jo in attack, is expected from Vladimir Petkovic for this fixture against OM on Friday. Due to positive COVID-19 tests, Bordeaux could be without as many as nine players for Friday's fixture.

Preview Unlike Bordeaux, Marseille picked up a 3-0 win over US Chauvigny last weekend in the French Cup. Back in Ligue 1, Marseille earned a point following the 1-1 draw against Reims right before the winter break. The draw saw OM drop one spot lower, as they moved from 2nd to 3rd place on the Ligue 1 table, having 33 points from 9W, 6D, and 3L. The club has a form that reads: WWLWD ahead of this fixture against Bordeaux, and Jorge Sampaoli aims for three points in a bid to topple 2nd-placed OGC Nice [33 points]. A 3—4—3 formation with Arkadiusz Milik, Cengiz Ünder, and Dimitri Payet in attack is expected for this fixture against Bordeaux. Ahmadou Bamba Dieng [red card, vs. Reims] is suspended for this Friday's fixture.