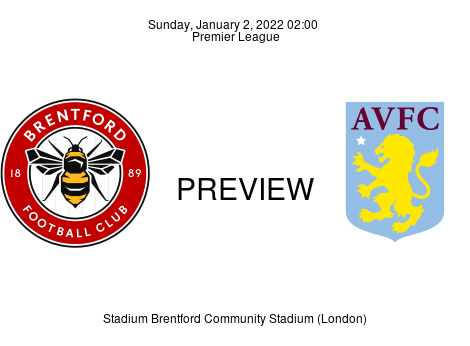 After suffering back-to-back Premier League defeats, the Bees return, looking for an unlikely win against the Lions at the weekend, in a bid to reverse the downward spiral. Brentford FC vs. Aston Villa FC kicks off at 15:00 (GMT+1) on Sunday, January 2, at Brentford Community Stadium.

Preview Brentford picked up a respectable 1-0 defeat to Manchester City earlier in the week when both sides locked horns at the Brentford Community Stadium. A sneaky Phil Foden (16’) slipped away from several red-and-white striped shirts before coolly tucking the ball away with a cushioned effort. The Bees were hoping the VAR would let them off the hook, but all it did was leave Phil Foden celebrating twice. The players were incredible, unbelievable, fantastic - especially in the first half, an impressed Thomas Frank said after the game, despite the loss to Manchester City. Following two defeats in a row, LDWLL, the Bees dropped one spot lower, from 13th to 14th place, on the Premier League table, having failed to pick up a point. Brentford have 20 points from 5W, 5D, & 8L, and a win here would do well to halt what appears to be a free-fall across the Premier League table. Thomas Frank has left it at a dynamic 3—5—2 formation since his side's recent return to the Premier League. Last time out, he brought in Yoane Wissa for the injured Mbeumo (hamstring) to pair up with Ivan Toney in attack. With Mbeumo still remaining as a possible absentee, the attacking duo from the game against Manchester City could be seen again for this fixture against the Lions. The Bees could be without as many as ten key players for Sunday’s game, and a postponement could be on the horizon.

Preview Aston Villa saw their fixture against Leeds United postponed due to an outbreak of COVID-19 at the latter. Following a request from Leeds United, the Premier League board met today [Sunday] and regrettably agreed to postpone the club's home fixture against Aston Villa, due to be played at 5.30 PM on Tuesday, December 28. A statement from the Premier League board read. In their last Premier League appearance, Villa picked up a 3-1 defeat to Chelsea, which leaves the club in 12th place with 22 points from 7W, 1D, & 10L. The Lions will be returning with two victories in five games: LWLWL. Having made an encouraging start to life at Villa (7G: 4W, 0D, & 3L), Steven Gerrard is relishing the opportunity to add players to an already impressive squad during the January transfer window, which opens this weekend. On Sunday, Villa could line up the 4—3—1—2 formation with Danny Ings and Ollie Watkins in attack for this fixture against Brentford.