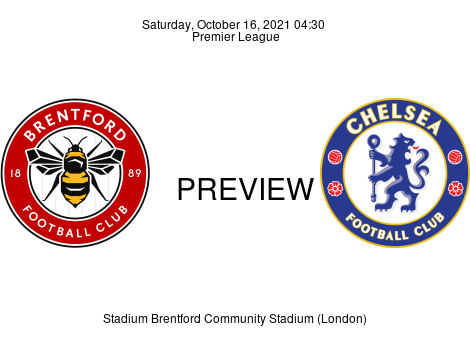 Brentford F.C. vs. Chelsea F.C. kicks off at 17:30 (GMT+1) on Saturday, October 16, at Brentford Community Stadium. Referee Anthony Taylor will take charge of this game while Gary Beswick and Adam Nunn will be assisting. Paul Tierney will be tucked away in the VAR room for the length of this game.

Preview Brentford remains inside the top-eight following a remarkable 2-1 win over West Ham before the international break thanks to a last-gasp effort from Yoane Wissa (90’+4) in stoppage time. It was the second victory for Thomas Frank’s side in five games: DLWDW, leaving the club in 7th place, having picked up 12 points after 3W, 3D, & 1L. The Bees are the first team in Premier League history to remain unbeaten in their first three London derbies, having picked up a draw against Palace and victories over Arsenal and West Ham United. On Saturday, Thomas Frank will aim to extend the Bees’ 78%-win rate against Chelsea. - The best of any club in the Premier League. An average of 1.43 goals per game has helped Brentford keep the remarkable run of form intact with a ten-goal haul in seven appearances. Brentford are left with a G.D. of +4, having conceded six times this season. An average of 0.86 goals conceded per game. Thomas Frank’s 3—5—2 formation will see Mbeumo in attack alongside Ivan Toney. Brentford have no injury worries ahead of this game against Chelsea on Saturday.

Preview Thomas Tuchel’s side remains at the top of the Premier League table with 16 points after 5W, 1D, & 1L, following the 3-1 win over Southampton before the international break. It was the third victory for the Blues in five games: DWWLW. With only a point ahead of second-placed Liverpool, the Blues must pick up a win to see their chances of remaining at the top secured with the finest of margins, as the likes of United, City, Everton, and Brighton trail behind by only two points. Despite the arsenal at his disposal, writing Brentford off could prove to be a costly error for Thomas Tuchel following the newly-promoted club’s outstanding record. - With the resilient performance in the 3-3 draw against Liverpool serving as an eye-opener. However, judging by the numbers alone, the scales swing in Chelsea’s favor. A remarkable fifteen-goal haul (2.14 g.s.p.g) leaves the Blues as the second-highest scoring side in the league. Having conceded only three goals (0.43 goals-per-match), Chelsea remains the least conceding side in the league alongside Manchester City. However, the numbers could fail to produce the desired results, citing the unavailability of several key players. Romelu Lukaku, Antonio Rudiger, and Reece James are all possible absentees for this game. Thiago Silva could also miss this fixture due to international commitments with Brazil. A change to the 4—3—3 formation could be on the cards for Tuchel, with Timo Werner serving as the focal point in attack.