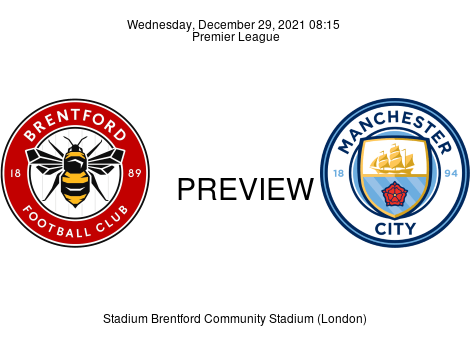 Without a sting, the Bees return following their defeat to the Seagulls on Boxing Day, hoping to reverse the downward trend and keep the hopes of a Premier League sequel alive. Brentford FC vs. Manchester City FC, kicks off at 21:15 (GMT+1) on Wednesday, December 29, at the Brentford Community Stadium.

Preview The Bees picked up a 2-0 defeat to Brighton & Hove Albion on Sunday. A remarkable ball over the top from the Zambian, Brighton’s Mwepu, found Leandro Trossard (34'), whose first touch cushioned the ball into the net for the opener. With a one-goal deficit, the Bees were looking to find their way back but were stunned by an 18-yard-strike from Maupay (42’) three minutes before half-time. Brighton’s goalkeeper, Robert Sánchez, prevented Brentford from finding the back of the net on two occasions, the second being a fabulous diving save to keep the Bees out. I thought Brighton were better than us in the first half, and we were better than them in the second half, Thomas Frank said. They, unfortunately, took their chances during our bad spell, he added. The defeat was Brentford's second loss in five league games: WLDWL, and it saw the club drop one spot from 12th to 13th place on the Premier League table. Brentford are left with 20 points after 5W, 5D, and 7L. Ivan Toney returned to the starting lineup for the game against Brighton after a spell with COVID but failed to find his mark alongside Bryan Mbeumo, who was never really in the game, having lost the ball a couple of times in the final third. However, both are expected to return in attack on Wednesday for this difficult fixture against Manchester City. The 3—5—2 formation will be seen once again.

Preview Manchester City survived a mid-game wobble to complete a 6-3 win over Leicester City on Boxing Day. The Cityzens were four goals up inside the first 30 minutes. But an inspiring fight-back from the Foxes saw the lead shrink to just a goal a few minutes into the second half. However, a goal from Aymeric Laporte (69') put some sky-blue water between City and the Foxes before Raheem Sterling (87') wrapped up the three points. With Liverpool failing to take part in the Boxing Day action, Manchester City extended their lead to six points at the top of the table, having picked up 47 points from 15W, 2D, & 2L. The Cityzens will be returning with five straight victories: WWWWW and greedy Pep intends to run away with three more points and remain near-invincible before taking on Arsenal on New Year’s Day. Phil Foden and Jack Grealish hit the bench on Boxing Day, having hit the club earlier at Pep’s disapproval. Both could remain out of the squad for Wednesday’s game. A 4—3—3 formation with Gabriel Jesus, Raheem Sterling, and Riyad Mahrez is expected for this fixture against Brentford.