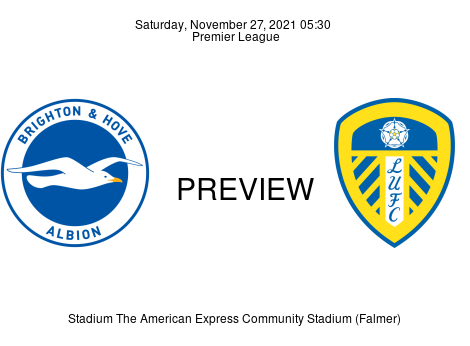 The Seagulls take on the Peacocks at 18:30 (GMT+1) on Saturday, November 27, at Falmer Stadium, hoping to maintain their place inside the top-ten and keep the likes of Crystal Palace, Leicester City, and Everton at bay. Referee Craig Pawson will have the assistants, Lee Betts and Richard West, give him a hand for the length of the game, while the fourth official, John Brooks, will be in communication from the sidelines. Jarred Gillett will be the VAR.

Preview Albion’s ambitions to remain in the first half of the Premier League table suffered a huge blow last Saturday when they lost 2-0 to a Gerrard-led Aston Villa at Villa Park with 42,000 spectators in attendance. The Seagulls were on the back foot right from the get-go, leaving themselves open to attack in the first fifteen minutes. Albion had held on to the stalemate despite several nerve-racking moments after surviving the early scare. But late into the game, Ollie Watkins (84') dragged three Albion shirts along before unleashing a fabulous right-footed shot into the top side corner. Five minutes later, Mings (89') tucked a rebound away to leave Albion without a win after five Premier League matches: DLDDL. Aston Villa deserved to win as they scored, Graham Potter admitted after his 100th game at the helm for Brighton (29W, 33D, & 38L) came to an end. The defeat also saw Albion drop two spots from 7th to 9th place on the table after failing to pick up a point. With a 28%-win record, Graham Potter hopes to get back to winning ways when his side takes on Leeds. The Seagulls have 17 points in total after 4W, 5D, & 3L. A 4—2—3—1 formation with Maupay is expected against the Peacocks on Saturday.

Preview Leeds United saw three points slip through their fingers after conceding twice in the second forty-five in a 2-1 defeat at the Tottenham Hotspur Stadium. Daniel James (44') had Leeds in front against Spurs with a minute left to play before the break, but Højbjerg (58') found the leveler minutes after the interval. Nine minutes after the hour mark, Sergio Reguilón (69') tucked Tottenham’s second goal away and condemned Leeds to their second defeat in five EPL matches, LDWDL. In the first half, we played better, in the second half, they did, Marcelo Bielsa rightly admitted after the game. The victory saw Leeds drop two places, from 15th to 17th place on the Premier League table, having failed to pick up a point. Leeds has a total of 11 points from 2W, 5D, & 5L. Marcelo Bielsa has a 65% win against English managers in the Premier League and remains in the running to improve on the record. An unconventional 3—3—3—1 formation was seen against Spurs last weekend and could remain in place for this Saturday’s game. Marcelo Bielsa has revealed the availability of Rodrigo and Raphinha for this fixture.