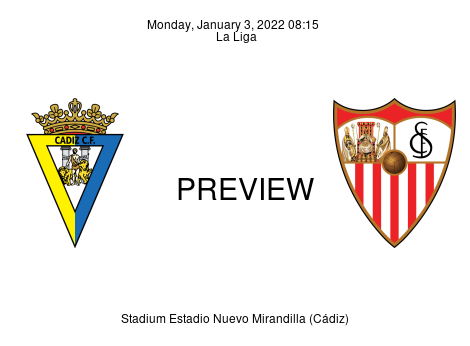 Having held Real Madrid to a draw, Cádiz are back, against the Sevillistas, for their first appearance in the new year. Cádiz CF vs. Sevilla FC kicks off at 21:15 (GMT+1) on Monday, January 3 at the Estadio Nuevo Mirandilla.

Preview Cadiz make their return following the goalless draw against Real Madrid at the Santiago Bernabéu on La Liga Matchday 18, the 19th of December 2021. Madrid had the first chance of the game, but resilient defending from the yellow-wearing side kept Los Blancos out. Minutes later, Cadiz’s goalkeeper, Jeremias Ledesma, denied Federico Valverde, who had made an attempt from outside the box. Minutes after the interval, Ledesma made another intervention to keep Eden Hazard -- who had made a rare start -- from hitting the back of the net. Over the course of the second forty-five, Ledesma reiterated his candidacy for Man-of-the-Match with a number of important interventions to keep Cadiz in the game until the final whistle. The draw leaves 19th-placed Cádiz without a win in five LaLiga games: LLLDD. The Yellow Submarine have amassed 14 points after 2W, 8D, & 8L, and will be looking to find the same form, seen over two weeks ago for this fixture against Sevilla. A 4—2—3—1 formation with Anthony ‘Choco’ Lozano in attack is expected from Álvaro Cervera for this game against Sevilla. Choco is the club’s top scorer with five goals.

Preview Sevilla traveled back in time for the LaLiga Matchday 4 fixture against Barcelona, earlier postponed due to a clash with the international schedule. French footballer, Jules Koundé [R. 64’] had hit the red and dusty self-destruct button, having retaliated to an earlier provocation by throwing the ball into Jordi Alba’s face. Well-seasoned in the art of acting, Alba made a meal of it, going to ground immediately in wild fashion and staying down until the red was shown. Before the short episode, Papu Gomez (32') had shown off some dance moves after his goal. However, Ronald Araujo (45') crashed his party with the leveler at the stroke of halftime. The 1-1 draw left Sevilla with 10 points out of a possible 15, LWWWD, and in 2nd place with 38 points from 11W, 5D, and 2L. Julen Lopetegui and the Sevillistas could line up with the 4—3—3 formation against Cadiz. Rafa Mir, Papu Gomez, and Lucas Ocampos are expected in attack. The transfer window is open and Sevilla have their eyes set on adding more firepower in attack. According to reports from L'Equipe, Manchester United's Anthony Martial remains a top priority target for Sevilla. Martial is willing to make an exit from United, having been knocked down the pecking order following Ronaldo’s return to the red side of Manchester.