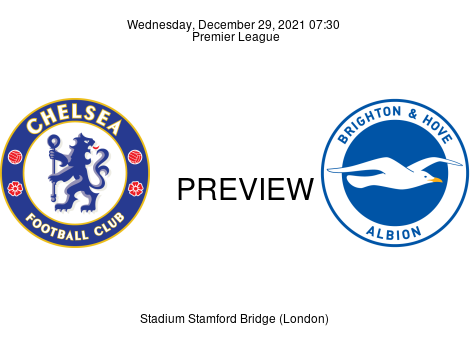 After a Lukaku-inspired 3-1 win over the Lions, the Blues return for another round of Premier League action, looking to close the gap on the league leaders, Manchester City. Chelsea FC vs. Brighton & Hove Albion kicks off at 20:30 (GMT+1) on Wednesday, December 29, at Stamford Bridge.

Preview Chelsea bagged three points on Boxing Day after completing a comeback against Aston Villa at Villa Park. An own goal from Reece James (28' O.G.) left Villa in the lead inside the first thirty minutes. But generous Matty Cash decided to play the role of Santa Clause, having handed Chelsea the gift of a Boxing Day penalty, courtesy of a clumsy challenge inside the box. A Jorginho-styled penalty from the man himself [Jorginho (34' P.)] restored parity at Villa Park, four minutes past the half-hour mark. Second-half substitute, Romelu Lukaku (56'), hit the back of the net ten minutes after coming on, leaving Chelsea with the lead. Villa looked like a side with a devious plan to steal a point, but a remarkable solo run from Lukaku inside stoppage time could only be stopped illegitimately inside the box. Jorginho (90' P.) stepped up once again to complete the brace from the spot. The victory saw third-placed Chelsea [41 points] close the gap on second-placed Liverpool [41 points], who failed to take part in the Boxing Day action. Having returned to winning ways after two games without a win, Thomas Tuchel aims for back-to-back victories on Wednesday: LWDDW. Over the course of the season, the Blues have picked up 12W, 5D, and 2L. For this game against the Seagulls, Thomas Tuchel’s 3—4—2—1 formation could see Romelu Lukaku return to the starting line-up to lead the attack.

Preview Brighton had gone 11 Premier League games without a victory but eventually broke the duck with a 2-0 win over Brentford on Boxing Day. Leandro Trossard (34') bagged the opener with a remarkable lob over the goalkeeper. Minutes later, Maupay’s 18-yard strike in the 42nd minute left Brighton with the double. Robert Sánchez was called upon twice to prevent Brentford from finding their way back into the game. Remarkably, the victory saw the Seagulls fly across the table, from 13th to 9th place, having returned to winning ways: DDDLW. Brighton has 23 points from 5W, 8D, and 4L. For the game against the Bees, Potter went about with a variant of the 4—3—3 formation, the 4—1—2—1—2. With the win, he could be sticking with the same shape. Neal Maupay and Leandro Trossard are expected in attack once again. Danny Welbeck made his comeback after a long spell on the sidelines due to a hamstring injury and could make another off-the-bench appearance on Wednesday. Meanwhile, Yves Bissouma has served his suspension and will be available again for Potter.