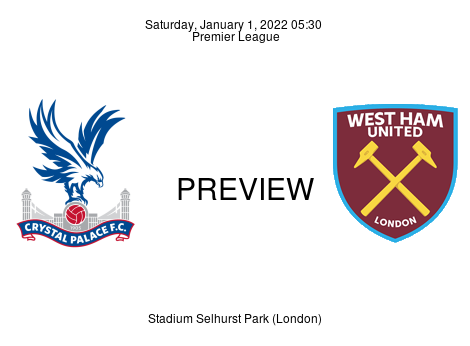 With a haul of three past the Canaries, the Eagles are back for more Premier League action, this time against the Irons, hoping to take three points and break into the upper half of the Premier League table. Crystal Palace vs. West Ham United kicks off at 18:30 (GMT+1) on Saturday, January 1, at Selhurst Park.

Preview Crystal Palace picked up a 3-0 win over Norwich City on home soil earlier in the week. A clumsy challenge from Norwich’s Kenny McLean saw Palace awarded a penalty, leaving Odsonne Édouard (8’ P.) looming over the ball before putting the Eagles in front inside the first ten minutes. Minutes later, Jean-Philippe Mateta (38), who broke into the starting line-up as a replacement for the suspended Wilfried Zaha, doubled Palace’s lead. Three minutes before the end of the first forty-five, Jeffrey Schlupp (42’) struck with the third and final goal of the game. It was a good day for us, the Eagles' assistant manager, Osian Roberts, said following Patrick Vieira’s absence due to a positive COVID-19 result. Performance-wise and result-wise, it was really important for us today. But especially after the result on Sunday [0-3 vs. Spurs] and then coming back to play at home, Roberts added. The victory saw Crystal Palace move one spot up the table, from 12th to 11th place, having recently returned to winning ways: LWDLW. Crystal Palace have 23 points from 5W, 8D, & 6L, and a win here would see the Eagles reiterate their intention to break into the top-ten. Following remote instructions, Palace lined up with the 4—3—3 formation, which saw Odsonne Édouard, Jean-Philippe Mateta, and Jordan Ayew in attack. A similar shape is expected with Wilfried Zaha returning to the starting line-up on New Year’s Day at the expense of Jean-Philippe Mateta.

Preview The Hammers picked up a 4-1 win over Watford earlier in the week and moved one spot from 6th to 5th place on the table. Watford’s Emmanuel Dennis (4') bagged the opener inside the first five minutes, but Tomáš Souček (27’) soon restored both sides on level terms. Saïd Benrahma (29’) tucked the ball away for West Ham’s second before Bowen saw his improvised half-volley chalked off by the VAR for a foul in the build-up. Mark Nobel (58’ P.) eventually increased West Ham’s lead to two, from the spot, before Nikola Vlašić (90’+2) put the game beyond Watford. I'm demanding high levels of our players and I want that to show in how we play, Moyes said in his post-match interview. The Irons have 31 points from 9W, 4D, & 6L after returning to winning ways following back-to-back defeats: WDLLW. West Ham could line up with the 4—2—3—1 formation, leaving Michail 'John Cena' Antonio handling business at the top of the shape once again.