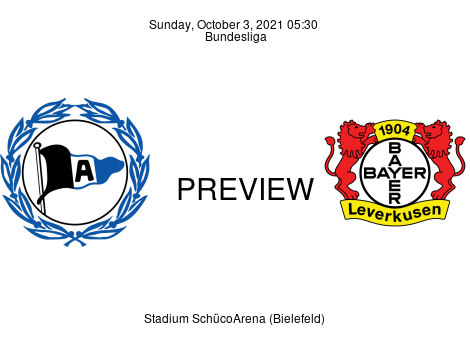 The German Bundesliga fixture, Arminia Bielefeld vs. Bayer 04 Leverkusen, kicks off at 18:30 (GMT+1) on Sunday, October 3 at the Bielefelder Alm.

Preview Without continental football, Arminia Bielefeld returns to Bundesliga action after last weekend's defeat to Union Berlin at the Alter Forsterei. Living dangerously, Arminia were lucky not to concede before the break as several clear-cut chances went by, with Union Berlin failing to convert. The visitors held on tightly to the stalemate, determined to earn a point, but a remarkable effort from Union's Kevin Behrens (88') separated both sides with two minutes left on the clock. A moment later, Behrens returned with a stunning effort which had the keeper beaten but halted by the crossbar. After failing to earn a point on Matchday 6, Bielefeld remains in 16th place with the Bundesliga form: DDLDL. Having no victories, the club has 4 points after 0W, 4D, & 2L. An average of 0.5 goals per game sees the home team with 3 goals in six Bundesliga appearances. At their end, the club has conceded 6 goals and thus has a goal difference of -3. Frank Kramer will continue in his hunt for his first win when he returns to the dugout on Sunday. A 4—2—3—1 formation with Klos in attack is expected against Bayer Leverkusen. A quick look at the injury list reveals Vasiliadis (ankle) is ruled out, while Czyborra (hip) and Fernandes (ill) are in doubt for this fixture.

Preview Bayer Leverkusen crushed Celtic, 4-0, in Thursday's UEFA Europa League at Celtic Park. Die Werkself defeated FSV Mainz 1-0 last weekend, keeping them in second place in the Bundesliga table, one spot and three points behind first-placed Bayern. With impressive numbers, Leverkusen have only one defeat in five games, WWLWW, since the start of the season, leaving the club with 13 points from 4W, 1D, & 1L. Gerardo Seoane will aim to pick up another victory on Sunday while hoping Bayern slips up against Frankfurt in order to close the gap to the champions. Having 16 goals after six Bundesliga games, Bayer are left with an average of 2.67 goals scored per game. Die Werkself have also conceded 7 goals (1.17 goals-per-match) so far and have a G.D. of +9. The club has conceded an average of 1.17 goals-per-match. On Sunday, the 4—2—3—1 formation will return with Lucas Alario at the top of the design against Arminia Bielefeld. Andrich is suspended, while Baumgartlinger (knee) and Fosu-Mensah (knee) are ruled out. Palacios (ankle) and Tapsoba (ankle) will also be unavailable while Kossounou remains in doubt due to a thigh injury.