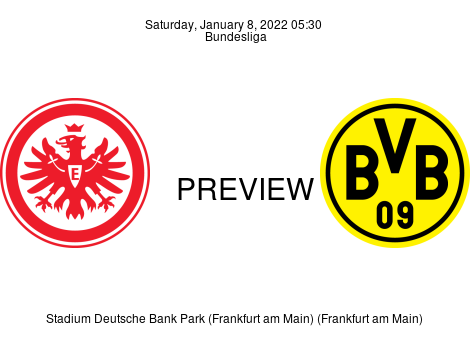 The Eagles are back for more Bundesliga action, aiming to pick up three points in their first game of the new year and break into the top-four. Eintracht Frankfurt vs. Borussia Dortmund kicks off at 18:30 (GMT+1) on Saturday, January 8, at the Deutsche Bank Park.

Preview The Eagles picked up a 1-0 win over Mainz 05 right before the winter break, on the 18th of December. A well-executed counter-attack, eleven minutes to the stroke of half-time, was finished off by Jesper Lindstrøm (34’), leaving Frankfurt in the lead. Frankfurt came close to doubling their lead, but second-half substitute Ajdin Hrustic saw his effort crash off the cross-bar. The Diva From the Main survived a stoppage-time scare as the Zero5ers came close to leveling the score-line. However, Kevin Trapp came to the rescue, ensuring Frankfurt's lead remained intact at the end of ninety minutes and stoppage time. The win leaves the Slipper Kickers with three straight victories: WLWWW, as they moved one spot ahead, from 7th to 6th place, having picked up 27 points from 7W, 6D, and 4L. With the top six crammed together at the upper end of the table, an unlikely win could propel Frankfurt into the top four if other results go their way at the end of Matchday 18. Last time out, Oliver Glasner adopted the 3—4—2—1 formation against the Zero5ers, leaving Rafael Santos Borré at the top of the design. Glasner is expected to stick to the same shape for this fixture against the Black & Yellows. A plague of hip injuries leaves Kristijan Jakic and Jens Petter Hauge on the list of possible absentees for the weekend.

Preview Unlike Frankfurt, Borussia Dortmund picked up a 3-2 defeat to Hertha Berlin right before the break at the Olympiastadion. One minute after the half-hour mark, Julian Brandt (31') put Dortmund in front. Minutes after the break, a remarkable solo run from Belfodil (51') saw Hertha Berlin return to level terms. Marco Richter (57' & 69') fired Hertha Berlin in front, before returning for the brace twelve minutes later. Steffen Tigges (83') cut Berlin’s lead down to one, but Dortmund failed to find the leveler before the end of the game. The defeat dented their title hopes, leaving 2nd-placed Dortmund nine points behind league leaders Bayern Munich. Over the course of the season, Dortmund has amassed 34 points from 11W, 1D, and 5L. Die Schwarzgelben have the form: WLDWL, ahead of this fixture against Eintracht Frankfurt, and Marco Rose aims for a quick return to winning ways. However, the 45-year-old knows a difficult game awaits him at Deutsche Bank Park on Saturday. A 4—2—3—1 formation with Erling Haaland leading the attack is expected for this fixture against the Eagles. Decimated by injuries, Dortmund could be without as many as eight players over the weekend.