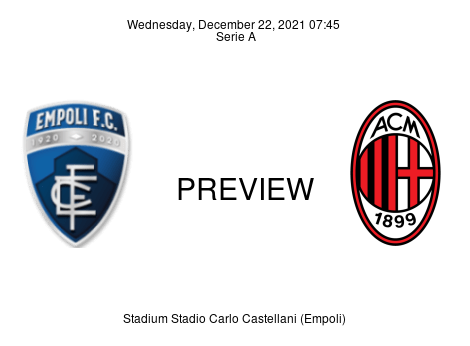 Preview Empoli salvaged a point in the 1-1 draw plagued by own goals at the Alberto Picco on Sunday. The visitors were on the front foot right from the get-go, making intelligent passes through pockets of space behind Spezia’s backline. However, resilient defending from the home side kept the stalemate intact till the end of the first forty-five. Five minutes after the break, an own goal from Riccardo Marchizza (50’ O.G.) saw Spezia take the lead. However, minutes later, another own goal, this time from Dimitris Nikolaou (71’ O.G.), saw Empoli level. The draw leaves Empoli unbeaten in five Serie A games, WDWWD. The Tuscans have not recorded a longer unbeaten streak in Serie A since March 2015 (8 games). However, the draw saw Empoli move one spot lower, from 8th to 9th place on the Serie A table, while having 27 points from 8W, 3D, and 7L. Andrea Pinamonti has been in remarkable form for Empoli, bagging 6 goals in 17 appearances for the club this season. He could return in attack, with Federico Di Francesco, in Aurelio Andreazzoli’s 4—3—1—2 formation. Patrick Cutrone, who is expected to play a part before the end of this clash, will have a point to prove when he takes on his former club, AC Milan.

Preview Milan picked up a narrow 1-0 defeat to Napoli on Sunday at the San Siro. Pioli’s side never really found their rhythm for the entire length of the game, which was later marred by a controversial moment that was subjected to a VAR review. Milan's would-be equalizer by Kessie was chalked off after Olivier Giroud was adjudged to have interfered with play while in an offside position, despite lying on the ground. The defeat saw the Rossoneri move from 2nd to 3rd place on the Serie A table, having picked up 39 points from 12W, 3D, & 3L. Milan has 7 points out of a possible 15, LWWDL, ahead of this fixture against Empoli. Stefano Pioli will have his eyes set on three points, but an obvious lack of chemistry in the final third could leave Milan in the mud against this highly attacking Empoli side, who had 22 shots, 6 O.T. against Spezia. However, a win here would see Milan become the second team in Serie A history to achieve at least 17 away league wins in a single calendar year [after Napoli's 18 in 2017]. Stefano Pioli’s 4—2—3—1 formation will see the club’s top scorer, Zlatan [7 goals], in attack once again, with Brahim Diaz playing directly behind him.