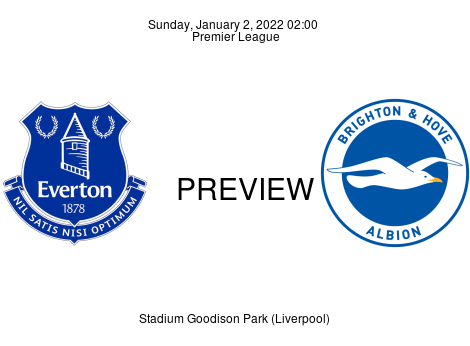 Having failed to see Premier League action in half a month, the Toffees hope to make their return this weekend against the Seagulls, as they look to shake off the COVID-induced dust and pick up three points. Everton FC vs. Brighton & Hove Albion kicks off at 15:00 (GMT+1) on Sunday, January 2, at Goodison Park.

Preview Match-rusty Everton last made a Premier League appearance on the 16th of December, in the 1-1 draw against Chelsea. Earlier in the week, the Toffees saw their fixture against injury-plagued, COVID-hit Newcastle United postponed. Everton now return with only one victory in five Premier League games: LLWLD, in 15th place, having had three of their fixtures postponed. The Toffees have a total of 19 points from 5W, 4D, and 8L. Last time out, Benítez went for the defensive 5—4—1 formation against Chelsea and picked up one precious point. However, a 4—4—1—1 formation, with Dominic Calvert-Lewin, who is tipped to make his return on Sunday, having been sidelined for weeks, is expected in an attack along with Demarai Gray. Meanwhile, Richarlison (calf injury), Andros Townsend (foot injury), and Yerry Mina (calf injury) all remain on the list of possible absentees ahead of Sunday’s game against the Seagulls. Having been promised a sizeable budget for the upcoming transfer window, Rafael Benítez is already working on a list of possible transfer targets in the shape of Chelsea’s midfielder, Ross Barkley, and Monaco’s Aleksandr Golovin.

Preview Earlier in the week, a stoppage-time header from Danny Welbeck (90+1’) salvaged a point for the Seagulls against Chelsea at Stamford Bridge. I thought it was a fantastic performance from the players, Graham Potter said in his post-match interview after the hard-fought draw against the Blues. It was full of courage and full of quality against a top side. To come here and be ourselves is a big challenge, and I thought we were, and that is a credit to the players. They were fantastic tonight, Potter added. The result saw Brighton slip one spot down the Premier League table from 9th to 10th place, having picked up 24 points from 5W, 9D, & 4L. The club has a form that reads: DDLWD ahead of this fixture against Everton, and a win here could see the Seagulls reclaim lost ground. Graham Potter mirrored Chelsea’s 3—4—2—1 formation on Wednesday and managed to run away with a point. However, a 4—3—3 formation with Maupay at the center of the attacking trio is anticipated for this fixture against Everton. Meanwhile, Leandro Trossard’s availability remains shrouded in mystery due to a hamstring injury.