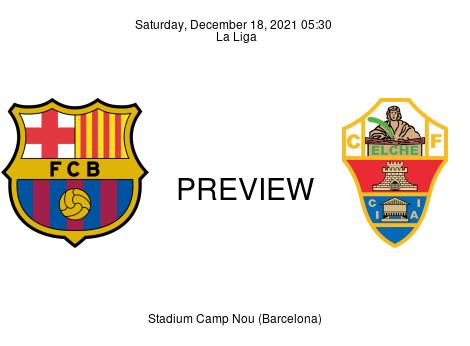 Preview Having suffered an embarrassing 3-0 defeat to Bayern Munich in the UEFA Champions League, Barcelona were looking to bounce back to winning ways. However, Xavi’s side was only able to pick up a point in the 2-2 draw against Osasuna last weekend at El Sadar. Nico González (12’) had Barcelona in the lead, after beating the offside trap. But Barcelona's lead only lasted for two minutes, as David Garcia (14’) found the leveler with a fine header. Minutes after the break, a well-executed counterattack saw Barcelona retake the lead through Abde Ezzalzouli (49’). Barcelona, however, would be denied all three points after Ezequiel Vila (86') fired through a forest of legs for the equalizer. The draw saw Barcelona drop by a spot, from 7th to 8th place on the La Liga table, having picked up 24 points from 6W, 6D, & 4L. Barcelona has an average of 1.6 points per game in the last five LaLiga fixtures: DWWLD, 8 points out of a possible 15. With a haul of three in the game against Bayern Munich, Xavi dropped the 4—3—3 formation for an unconventional 3—3—3—1, leaving Luuk de Jong in attack against Osasuna. However, Xavi could be returning to the former, having adopted the shape in the friendly match against Boca Juniors during the week. Memphis Depay joined the long list of players on the treatment table after picking up a hamstring injury in the UCL game against Bayern. Ansu Fati and Pedri are also ruled out, while Jordi Alba remains doubtful. Unfortunately, Sergio Aguero announced his retirement from football earlier in the week due to a heart issue.

Preview Elche picked up a 2-1 defeat to Valencia at the Mestalla stadium last Saturday. The narrow defeat saw the Ones from Elche remain in 16th place on the LaLiga table, having been left with 15 points from 3W, 6D, & 8L. Elche has 16 goals but conceded 24 at the back, leaving them with a goal difference of -8. Having picked up his first defeat with the club, DLDWL, the second for the club in five games, Francisco Rodríguez (4G: 3W, 0D & 1L) will be hoping to run away with at least a point in this difficult fixture against Barcelona on Saturday. The Ones from Elche could line up in the conventional 4—4—2 formation, leaving the duo consisting of Lucas Boyé and Lucas Pérez in attack. Elche has no major injury worries ahead of this clash against Barcelona, but Johan Mojica and Pedro Bigas are doubts.