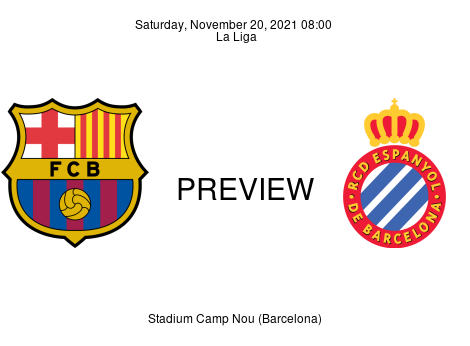 Preview Xavi will be making his coaching debut with the club when Barcelona appears for their 13th LaLiga match of the season. The 41-year-old aims to reverse the trend which sees Barcelona in the mid-section of the LaLiga table following Ronald Koeman’s axe. Right before the World Cup qualifying round of fixtures, Barcelona gave up a three-goal lead and picked up only a point in the 3-3 draw against Celta Vigo. Goals from Ansu Fati (5'), Busquets (18'), and Memphis Depay (34') had Barcelona in cruise control before the break. Minutes after the break, Iago Aspas (52') cut Vigo’s deficit down to two before Nolito (74') reduced Barcelona’s lead further down to one. Deep inside stoppage time, Iago Aspas (90’+6) returned for the leveler to deny Barcelona the win at Balaídos. The results left Barcelona with only one victory in five games: WLLDD, and 17 points after 4W, 5D, & 3L. On the numbers, Barcelona has a goal ratio of 1.58 g.p.g. this season, having scored 19 goals in 12 La Liga games. The club has conceded 15 goals and has a G.D. of +4. Barcelona recently added some depth to the squad with the return of the Brazilian right-back, Dani Alves. However, the 38-year-old will be ineligible to play until January. I'm here to fight, Alves said during his presentation. I'm not here to pass time or to live in Barcelona, he added. There will be plenty of fighting to do come Saturday when Xavi gets his hands wet on the job. In his last game in charge of the QNB Stars League side, Al Sadd [vs. Al-Duhail, 3-3], Xavi deployed the 3—4—1—2 formation. It remains to be seen if he will deploy a similar shape on Saturday or stick with the familiar 4—3—3. Ansu Fati (hamstring) and Sergino Dest (lumbago) are ruled out of this fixture, along with Nico González (groin), while Sergio Agüero remains ineligible to play due to a heart condition.

Preview Espanyol picked up a 2-0 win over Granada before the international break thanks to goals from Pedrosa (30') and Raul de Tomas (42') at the RCDE Stadium. The victory saw Espanyol keep their grip on 11th place, having picked up 17 points from 4W, 5D, & 4L, as they returned to winning ways: WDDLW. Vicente Moreno will aim to pick up a point against this inconsistent Barcelona side as he looks to give Xavi a hostile reception on his coaching debut in LaLiga. The Blanquiazules could line up in the 4—1—4—1 formation once again, with Raúl de Tomás in attack. The 27-year-old is Espanyol’s top scorer with 7 goals this season.