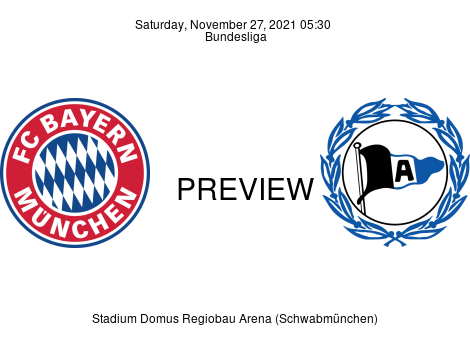 After being stunned by Augsburg in the Bavarian derby, Bayern Munich returns to German soil, aiming for a win over Arminia Bielefeld this weekend in a bid to maintain their narrow lead at the top of the table. This fixture between the Reds and the Blues kicks off at 18:30 (GMT+1) on Saturday, November 27, at Allianz Arena. Robert Lewandowski remains Bundesliga’s top scorer - with four consecutive top scorers’ title in the shape of a Demi-culverin on his back - while having scored 14 goals this season as he hunts for his 7th league top scorer title. Teammate Thomas Müller keeps the crown as Bundesliga’s assist king with 9 to his name, while the goalkeepers, Wolfsburg’s Koen Casteels and Hoffenheim’s Oliver Baumann have the highest number of clean sheets, 5. Second-placed Dortmund trails Bayern by a point, while Greuther Fürth stays rooted to the bottom of the table with one point. Bundesliga MD13 presents itself after 108 games and 323 goals.

Preview Despite bagging his 22nd Bundesliga goal against Augsburg, Robert Lewandowski’s goal (38') wasn’t enough to see Bayern pick up a point, as the Reds lost, 2-1, to the Fuggerstädter at the WWK Arena on Matchday 12. Goals from Mads Pedersen (23') and Andre Hahn (35') condemned Bayern to their second defeat of the season, putting an end to a red patch of unbeaten run in five games: WWWWL. Failing to earn a point, Bayern has 28 points after 9W, 1D, & 2L. The Reds are off the back of a 2-1 win over Dynamo Kyiv in Tuesday’s UEFA Champions League (MD5) fixture. An acrobatic over-head kick on a snowy evening saw Robert Lewandowski (14’) bag Bayern’s first before Kingsley Coman (42’) struck for the second. Having long secured qualification for the UCL round of 16, and now a first-place finish in the group stage, Julian Nagelsmann aims to return to winning ways on the home front. Impressive numbers at both ends of the pitch should mean an easy win for Bayern on Saturday, but bottom-placed Bielefeld could put up a spirited fight and cause an upset by running away with a point or two. As often seen, the 4—2—3—1 formation with Lewandowski at the top of the design will appear once again. On availability, Lucas Hernandez (hamstring) is ruled out, while Marcel Sabitzer recently picked up a calf injury. Choupo-Moting, Joshua Kimmich, and Josip Stanisic are all doubtful, having tested positive for coronavirus.

Preview Arminia Bielefeld picked up a 2-2 draw against VfL Wolfsburg at the Bielefelder Alm on MD12. Remaining in 17th place, the club has 9 points from 1W, 6D, & 5L, while having the form, DLLWD. Poor at both ends of the pitch, the club has 9 goals (0.75 gpg) after 12 Bundesliga games. Die Blauen have conceded 18 goals (1.5 g.c.p.g.) this season and have a G.D. of -9. Frank Kramer could use the 4—2—3—1 formation with the skipper, Klos, in attack. Florian Krüger’s availability for Saturday’s fixture remains shrouded in mystery due to illness.