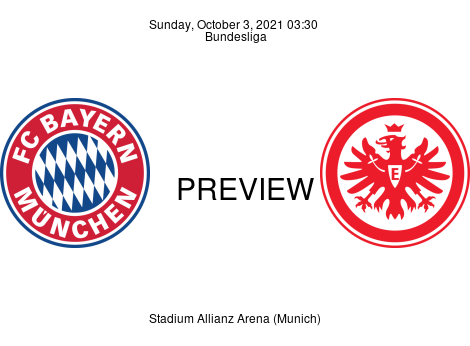 The German Bundesliga match between FC Bayern Munich and Eintracht Frankfurt will kick off at 16:30 (GMT+1) on Sunday, October 3 at Allianz Arena.

Preview Bayern Munich extended their domestic dominance across to the European front with a 5-0 win over a sorry Dynamo Kyiv in Wednesday's UEFA Champions League fixture. Having failed to score last weekend on the domestic front, Robert Lewandowski made up for lost appetite in front of goal with a brace against the Ukrainian side, (12' P. & 27'). On Matchday 6, ten-men Bayern extended the red-patch of victory with a 3-1 win over Furth, who gave a spirited performance despite going down against the Champions. Having five consecutive victories in the league: WWWWW, Bayern remains in first place, three points adrift of the closest rivals, Bayer Leverkusen and Wolfsburg, having picked up 16 points after 5W, 1D, & 0L. An impressive average of 3.83 goals per game keeps the champions at the top, leaving them with 23 goals in 6 Bundesliga games. Keeping it tight at the back, Bayern have conceded only 5 goals (0.83 goals conceded-per-game), and thus have a goal difference of +18. Julian Nagelsmann will return with the familiar 4—2—3—1 formation with Lewandoski in attack. Robert Lewandowski hasn’t gone on for more than one league match without a goal for nearly two years and hopes to extend his remarkable effort of 16 goals in 22 meetings against Frankfurt on Sunday. On availability, Banjamin Pavard is suspended for this game, having picked up a red in the game against Furth, while Ulreich will be missing from the squad due to a knee injury. Coman recently returned to training after a heart operation while Tolisso may be unavailable due to a calf injury.

Preview Eintracht Frankfurt will also be making a return after European commitments, following the 1-0 win over Antwerp in an UEFA Europa League fixture on Thursday. Last weekend, the club picked up a 1-1 draw against the Billy Goats, thanks to the goal from Rafael Santos Borre (45'+6). In 14th place on the Bundesliga table, Eintracht Frankfurt have 5 points after 0W, 5D, & 1L and return with five consecutive draws: DDDDD. This is the first time in the club's history to see Frankfurt winless in six matches into a new campaign. Having an average of 1 goal scored per game, Die Adler have a total of six. The Eagles have conceded 9 goals and have a G.D. of -3. Oliver Glasner could emerge with a 3—5—2 formation once again, with Borre and Lammers in attack. Durm (concussion), Lenz (thigh), and N'Dicka (knee) are all ruled out, while Rode (knee), and Younes will not be available.