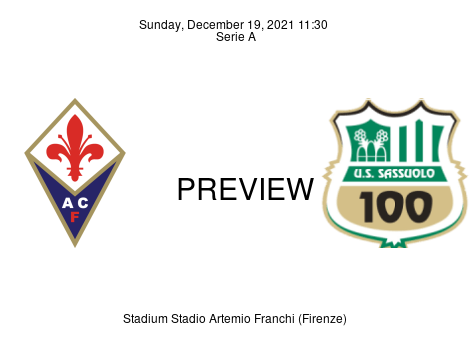 The Serie A fixture, ACF Fiorentina vs. U.S. Sassuolo Calcio, kicks off at 12:30 (GMT+1) on Sunday, December 19, at the Stadio Artemio Franchi.

Preview The Purples picked up a 4-0 win over Salernitana at the Stadio Artemio Franchi last Saturday. A magnificent outside of the right boot curler from Bonaventura (31') saw Fiorentina in the lead a minute after half an hour. Minutes after the break, a left-footed shot from Vlahovic (51', 84') saw him double Fiorentina’s advantage before returning for the brace in the second half. Cruising with a three-goal lead, Fiorentina found the back of the net once again, through Youssef Maleh (90') in the final minute of the game. In remarkable form, Fiorentina will be returning with three victories in a row: WLWWW, after the impressive win that saw the club move from 6th to 5th place. Having picked up 30 points after 10W, 0D, and 7L, the Lilies now trail the top-four by six points. A victory here could see the gap reduced if Napoli fails to pick up a victory over AC Milan at the weekend or if Atalanta fumbles against Roma. An impressive goal haul of 31 goals, partly due to Vlahovic’s remarkable form, leaves Fiorentina with an average of 1.82 goals per game this season. - With Vlahovic, who is now on Newcastle’s radar, having roughly half of them, 15. In addition, Fiorentina has also conceded 22 goals and has a G.D. of +9. - An average of 1.29 goals conceded per game. A 4—3—3 formation with Vlahovic at the focal point of attack is expected from Vincenzo Italiano for this game against Sassuolo.

Preview "Last weekend, ten-man Sassuolo picked up a 2-1 win over Lazio at the Stadio Città del Tricolore. Goals from Domenico Berardi (63’) and Giacomo Raspadori (69’) were enough to decide the outcome of the game, despite Lazio taking the lead inside the first ten minutes through Mattia Zaccagni (6’). Sassuolo is in 12th place on the Serie A table, having picked up 23 points from 6W, 5D, & 6L, and have a form that reads: DWDDW ahead of this fixture against Fiorentina. A win here could see them climb the table toward a top-ten place should favorable outcomes emerge at the end of Matchday 18. The club has 28 goals after 17 Serie A games. - A goal ratio of 1.65 goals scored per game. At the other end, the Neroverdi have conceded 26 goals so far this season and have a G.D. of +2. Alessio Dionisi could appear with the 4—3—3 formation once again against Fiorentina on Sunday. Meanwhile, Kaan Ayhan (red card) is suspended for this game.