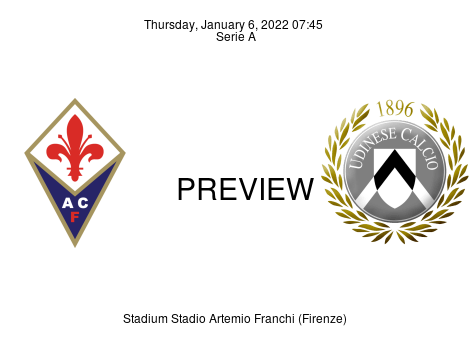 The Lilies take on the Little Zebras for their first game of the new year later this week, having last picked up a draw against the Yellow and Blues before the winter break. ACF Fiorentina vs. Udinese Calcio kicks off at 20:45 (GMT+1) on Thursday, January 6, at the Stadio Artemio Franchi.

Preview Fiorentina earned a point in the 1-1 draw against Hellas Verona last month. Taking you back to images from Matchday 19, Verona started on the front foot, calling twice before eventually establishing the lead through Kevin Lasagna (17'). - His first goal of the Serie A season. Minutes after the break, Dušan Vlahović fired above the crossbar, as Fiorentina went in search of the leveler. Late in the second-half, Castrovilli (82') headed the Purples back into the game with eight minutes left on the clock at the Stadio Marcantonio Bentegodi. Duncan wasted a huge chance to see the Purples take the lead, having failed to convert after stealing the ball off a yellow and blue shirt. The draw leaves Fiorentina unbeaten in five Serie A games: WWWDD. It also saw the Lilies move one spot down the table, from 6th to 7th place, having 32 points from 10W, 2D, and 7L. The Purples reiterated their intentions for an ambitious top-six finish with the recent acquisition of Jonathan Ikone. ACF Fiorentina is delighted to announce the signing of Nanitamo Jonathan Ikone from LOSC Lille on a permanent transfer, a statement from the club read earlier this week. The 23-year-old Frenchman was secured for €14M, having put pen to paper for a five-and-a-half-year contract. He will wear the number 11 shirt. However, Vincenzo Italiano may be without him when he lines up the 4—3—3 against Udinese. Serie A’s top scorer, Dušan Vlahović [16 goals], is expected in the middle of the attacking trio.

Preview The White and Blacks failed to take part in the last round of Serie A action, as Salernitana failed to travel for the game due to COVID cases in their squad. The league is right not to postpone the game, Udinese director, Pierpaolo Marino, told DAZN after the game was suspended. A game must not be postponed because a player tests positive [for COVID-19], he added. The Little Zebras remain in 14th place on the Serie A table, having picked up 20 points from 4W, 8D, and 6L. Match rusty, Udinese last played on the 18th of December when they picked up a 4-0 win over ten-man Cagliari. It was the club's first victory after four games without a win (DDLDW). Caretaker manager, Gabriele Cioffi, and Le Zebrette could appear with the 3—5—2 formation once again with Gerard Deulofeu and Beto in attack.