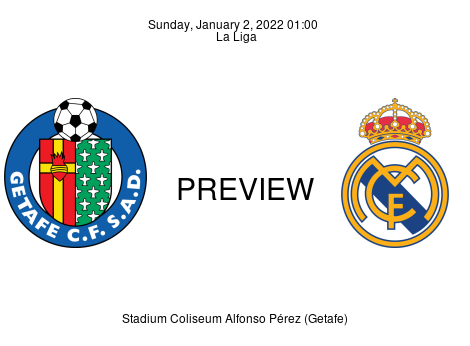 Preview Getafe picked up a narrow 1-0 victory over Osasuna on LaLiga Matchday 18 at the Coliseum Alfonso Pérez. Getafe’s shot-stopper, David Soria, was called upon twice to keep the home side from falling behind in the first period. Minutes into the second half, Osasuna’s Sergio Herrera did similar at the other end. Both sides had seen several half-chances go by before the second-half substitute, Darío Poveda (90'+3), eventually broke the deadlock in stoppage time. It was Poveda’s first goal in Spanish top-flight football and it saw Getafe snatch all three points in what became their third win of the season. Having escaped the relegation zone, Getafe are in 16th place with 15 points from 3W, 6D, and 9L. An unlikely win over Real Madrid would see the Deep Blue Ones put some deep blue water between themselves and the murky end of the relegation zone. However, a defeat could see Getafe return right back to the troubled end of the table. Quique Sánchez Flores now has a 33%-win rate (12G: 4W, 5D, and 3L) in his third spell at the club, following the departure of Michel. The 56-year-old could line up in the 3—5—2 formation with the goal-scorer, Darío Poveda, and Enes Ünal in attack for this fixture against Real Madrid on Sunday.

Preview Real Madrid picked up a 2-1 win over Athletic Club on Wednesday, December 22, having traveled back in time for the previously postponed game against the Lions. Karim Benzema (4’) wasted no time in putting daylight between both sides with a sublime right-footed curler. Three minutes later, Benzema (7’) was back with the brace, having been fortunate to receive a wayward back pass despite being behind the backline. Three minutes after the gift, Athletic Club reacted, reducing Madrid’s lead to one through a fine effort from Oihan Sancet (10’). - His first goal of the campaign. The 2-1 victory leaves Los Blancos eight points clear at the top of the LaLiga table with 46 points from 14W, 4D, and 1L. Real Madrid remains unbeaten in five games: WWWDW, and no team has suffered fewer defeats than the Whites in Europe’s Big-Five. At the end of Sunday's fixture, Carlo Ancelotti aims to keep the white paint of victory wet, despite reports which could see Madrid appear without several key players. Thibaut Courtois, Eduardo Camavinga, Federico Valverde, and Vinicius Jnr., have all tested positive for COVID-19. Carlo Ancelotti will be left to contemplate his options at both ends of the pitch when he lays out the familiar 4—3—3.