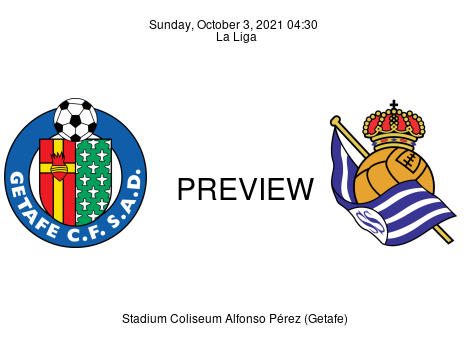 The Spanish LaLiga Santander fixture, Getafe CF vs. Real Sociedad, kicks off at 17:30 (GMT+1) on Matchday 8, Sunday, October 3 at the Coliseum Alfonso Pérez.

Preview Languishing at the bottom of the LaLiga table in 20th place, while having seven straight defeats, 0W, 0D & 7L, Getafe looks like a side already ripe for relegation. Last weekend, Getafe added to the red patch of defeats with a 2-0 loss to Real Betis courtesy of a brace, in the shape of a single goal in both halves from Willian Jose (14' & 55'). Getafe registered three shots on target but weren't clinical enough to convert any of their chances at the Benito Villamarín. On Sunday, Míchel will aim for a point, despite the unfavourable numbers, with the aim of gradually turning around his side's fortunes. Ranking poorly on every key performing indicator on the table, Míchel's side has the lowest number of goals scored, 2, after seven games. Doing equally badly in defense, Getafe remains the highest conceding side in the league alongside Granada, Levante and Mallorca with 12 goals in seven appearances. The numbers are so grim that even a victory over Real Sociedad will leave Getafe in the bottom three. Michel, who took over from Jose Bordalas in the summer, is unsure what his future holds if the poor results continue to come. On Sunday, he could line up the 3—5—2 formation with José Macías and Enes Ünal in attack as he hopes for a miracle against red-hot-form Real Sociedad.

Preview Real Sociedad stay in 2nd place on the La Liga table, unbeaten in five games: WWDWW, having picked up 16 points from 5W, 1D, & 1L. The club returns after Thursday's 1-1 draw against AS Monaco in the UEFA Europa League. Axel Disasi (16') had the French side in front early in the first half, before Mikel Merino (53') levelled the score line after the break. Last weekend, Real Sociedad defeated Elche 1-0 at the Reale Arena, courtesy of a goal from Mikel Oyarzabal (81'). Sociedad's performance in the final third, over the course of the season, has brought the club 10 goals after 7 La Liga games. Having an average of 1.43 goals scored per game, La Reales have conceded 6 goals so far and have a G.D. of +4. The club has also conceded an average of 0.86 goals-per-match. Blighted by injuries, manager Imanol Alguacil could utilize the attacking 4—3—3 formation with Mikel Oyarzabal, Portu, and Januzaj in attack. A plague of hamstring injuries would see the center-forwards, Alexander Isak and Alexander Sörloth unavailable for this fixture against Getafe.