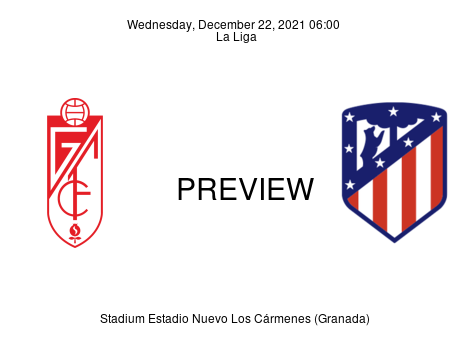 The LaLiga match between Granada CF and Atlético de Madrid kicks off at 19:00 (GMT+1) on Wednesday, December 22, at Los Cármenes.

Preview Granada picked up a 4-1 win over Mallorca at the weekend on home soil. A well-executed counterattack saw Jorge Molina (20’) bag the opener with a fine right-footed finish to establish the lead for Granada midway through the first half. But Granada's lead lasted only four minutes as Dani Rodriguez (24’) restored Mallorca back on level terms with a fine header. One minute after the hour mark, Molina (61’ & 90’+1) returned for the brace, before going on to complete the hattrick in stoppage time. Antonio Puertas (90+6’) wrapped up all three points with Granada’s fourth, six minutes into stoppage time. The victory saw Granada remain in 15th place, having picked up 8 points in the last five LaLiga games: LDWDW. In total, the club has 19 points after 4W, 7D, and 6L. An unlikely win over Atletico Madrid could see Granada climb a spot up the table, but a defeat would see them remain in 15th place. Robert Moreno has kept the 4—4—2 formation in place for a major portion of the season and is expected to do so once again on Wednesday, with the lesser-known Luis Suárez and hattrick-hero Jorge Molina in attack.

Preview After a 2-0 loss to Real Madrid, Atlético Madrid were looking to get their title defense back on track, but were stunned in another 2-1 defeat to Sevilla over the weekend. A dramatic late strike from Ocampos condemned ATM to three defeats in a row, WWLLL. A remarkable 25-yard-strike from Ivan Rakitić (7’) saw Sevilla take the lead inside the opening minutes. But, Felipe (33’) found the leveler three minutes after the half-hour mark. - A fine header to restore parity at the Ramón Sánchez Pizjuán. Atletico Madrid had failed to take their chances until late in the second half, when Lucas Ocampos (88’) struck with a remarkable half-volley to give Sevilla all three points. We are in a moment of difficulty, and the results are not there for us, Diego Simeone said in his post-match interview after the game. But I have the same illusion as always. We have to work, recover players from injury and have confidence we can get back on track, he added. We must seek to find the forcefulness, so things roll naturally for us, but the responsibility is mine, and we are going to take lessons moving forward, that is for sure. The defeat leaves the LaLiga champions in 5th place with 29 points from 8W, 5D, and 4L. In a bid to reclaim lost ground, Diego Simeone will be aiming for maximum points on Wednesday against this technically weaker Granada side. He could appear with the 3—1—4—2 formation, leaving Suarez and Ángel Correa in attack.