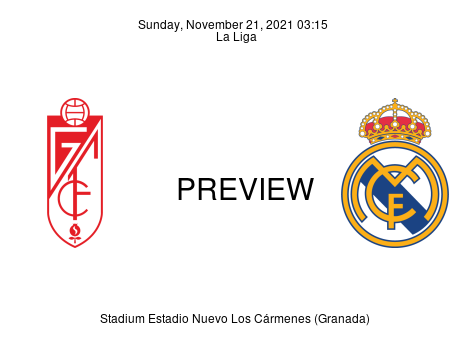 Preview Granada picked up a disappointing 2-0 defeat to Espanyol at the RCDE Stadium just before the recently concluded World Cup qualifying round of fixtures. Goals from Pedrosa (30') and Raul de Tomas (42') settled the duel of ninety minutes to leave Granada with their first defeat in five LaLiga games: WDDWL. The loss saw the club drop two spots lower, from 15th to 17th place, having failed to pick up a point on Matchday 13. Granada has 11 points after 2W, 5D, and 5L, and a return to winning ways appears unlikely given this difficult game against Real Madrid, who have the most goals in the league, 28. As expected, Granada has a basket full of unimpressive numbers at both ends of the pitch. In the final third, the club can only muster an average of 0.92 goals per game, having netted 11 times in 12 La Liga games. They have also conceded 16 goals and have a G.D. of -5. An average of 1.33 goals conceded per game. Robert Moreno could utilize the 4—4—2 formation once again with the lesser-known Luis Suárez and Molina in attack.

Preview Real Madrid, on the other hand, picked up a 2-1 win over Rayo Vallecano on Saturday, November 6, at the Estadio Santiago Bernabéu. Madrid took the lead within the first fifteen minutes, thanks to Kroos (14'). Minutes later, Karim Benzema (38') got on the end of a remarkable assist from David Alaba for Madrid’s second. The Whites would have been three goals up after fancy footwork from Vinicius Jnr. left several blue shirts on the pitch as he dribbled through a forest of legs before his effort was cleared off the line. The Brazilian was back a moment later with a carefully disguised back-heel for Mendy, who followed the example to set Benzema up for the shot. However, the Frenchman failed to find the mark. Vallecano crashed an effort at the woodwork before the veteran, Radamel Falcao (76'), cut Madrid’s lead down to one. Los Blancos are in second place with 27 points from 8W, 3D, and 1L and have back-to-back victories: LWDWW. Militão and Vinicius Jr. returned to the squad after their WC qualifying efforts with Brazil. The latter (7 goals) is only behind Karim Benzema (10 goals) in Madrid’s top goal-scorers list. Both players are expected to form part of Carlo Ancelotti’s attacking trio in the 4—3—3 formation for this game against Granada. Over the week, Valverde and Ceballos trained on their own out on the pitch, while Gareth Bale worked indoors.