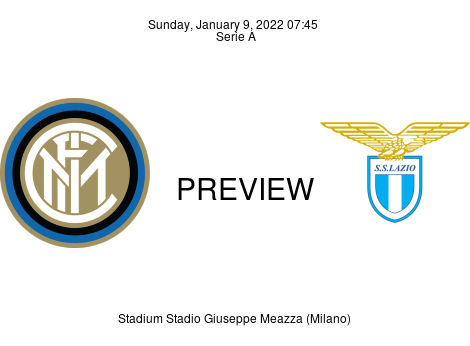 Preview Inter Milan's fixture against Bologna was suspended as the local health authorities (ASL) prevented the game from taking place due to rising COVID-19 cases in Bologna's squad. However, with Serie A refusing to postpone the fixture, the Well-Cherished One was forced to make an appearance and train before the game, as normal. Match officials proceeded with the pre-match tradition of inspecting the pitch and testing the goal-line technology, despite Bologna’s absence. The situation is chaotic, Inter director Beppe Marotta told Sky Sport Italia. I would limit the ASL's power; otherwise, we'll always face similar situations in the future, he added. With a game in hand, Inter Milan sits at the top of the Serie A table with 46 points, a point ahead of title hopefuls AC Milan [45 points], after 14W, 4D, and 1L. The Serie A champions are returning with five straight victories: WWWWW, ahead of this fixture against Lazio. Simone Inzaghi has a 68%-win rate [25G: 17W, 5D, & 3L], and aims to see the numbers improve at the end of Sunday’s fixture. The Nerazzurri will appear in the familiar 3—5—2 formation once again, with Lautaro Martínez and Edin Džeko in attack. However, Džeko remains doubtful and must return a negative PCR test before the game, having tested positive for COVID last week. Hakan Calhanoglu is on a yellow card suspension and will not take part in this fixture against Lazio.

Preview Lazio came back to salvage a point in Thursday’s six-goal thriller against Empoli, which ended 3-3 at the Stadio Olimpico. Empoli took the lead from the penalty spot after Bajrami (6' P.) sent Lazio’s goalkeeper diving the wrong way. Two minutes later, Zurkowski (8') doubled Empoli’s lead. However, a fine header from Immobile (14') cut Lazio’s deficit down to one, six minutes after Empoli's goal. Minutes into the second half, Sergej Milinković-Savić (66') restored Lazio back on level terms. Unmarked, Di Francesco (75') tucked away the ball to see Empoli retake the lead. However, a last-gasp effort from Sergej Milinković-Savić (90’+3) inside stoppage time rescued a point for Lazio as he bagged the brace. Following the draw, the club remained in 8th place on the Serie A table, having picked up 32 points from 9W, 5D, and 6L. A difficult fixture awaits Maurizio Sarri at San Siro as he looks to return to winning ways: WLWWD. A 4—3—3 formation with the trio consisting of Ciro Immobile, Felipe Anderson, and Pedro in attack is expected for this fixture against Inter Milan. The Biancocelesti will be without Francesco Acerbi (hamstring) and Daniel Akpa (AFCON).