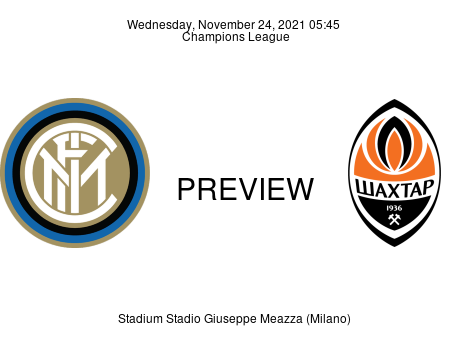 Following the goalless draw on UEFA Champions League Matchday 2, Inter Milan takes on Shakhtar Donetsk for the reverse Group D fixture, scheduled for kickoff at 18:45 (GMT+1) on Wednesday, November 24 at San Siro. Referee Ovidiu Haţegan (ROU) will be in charge for the length of the game, while Christian Dingert (GER) will be the VAR.

Preview Inter Milan put an end to Napoli’s season-long unbeaten run with a 3-2 win over the latter in Sunday’s Serie A fixture at the San Siro. The victory left the Italian side unbeaten in five games across all competitions: WWWDW. On UCL Matchday 4, Inter picked up a 3-1 win over Sheriff Tiraspol thanks to goals from Marcelo Brozović (54’), Milan Škriniar (65’), and Alexis Sánchez (82’). Aiming for three victories in a row on European soil, LDWW, Inter aims to topple first-placed Real Madrid at the top of Group D. With 7 points after 2W, 1D, & 1L, Inter trails the 13-time UEFA Champions League winner by 2 points. Inter Milan will go through to the round of 16 if they defeat Shakhtar Donetsk on Wednesday and Sheriff fails to defeat Real Madrid. A 3—5—2 formation with Lautaro Martinez and Edin Dzeko, who is expected to return to the starting line-up having started from the bench against Napoli, may be seen in attack. A plague of hamstring injuries will leave Alexis Sánchez and Stefan de Vrij out of this fixture. The former picked up the injury after bagging the only goal (56’) for Chile while on international duty in the World Cup qualifying round fixture against Paraguay.

Preview Shakhtar Donetsk picked up a 2-1 defeat to Real Madrid at the Santiago Bernabéu on UCL Matchday 4. Manager Roberto De Zerbi aims to salvage what is left of his side’s European campaign. We showed today that we aren’t ready to compete in the Champions League, De Zerbi eventually conceded, right after the defeat to Madrid. The statement comes after a boisterous claim in the early stages of the competition. I don’t care whether Inter or Real Madrid are favorites against us, we can beat anyone, he was quoted as saying. The controversial figure, De Zerbi, stirred up another boiling pot over the weekend when he was sent off after telling Rukh Lviv’s manager, Leonid Kuchuk, he was in the wrong profession. The rude remark came during Saturday’s game, which Shakhtar eventually won, 2-0. The Ukrainian outfit must defeat Inter to stay in contention for a place in the round of 16 while relying on the results of other fixtures. Shakhtar has 0W, 1D, & 3L, and the form: WWLWW. A 4—2—3—1 formation with Fernando at the top of the design is expected on Wednesday. Lassina Traoré is ruled out with a knee injury until February 2022.