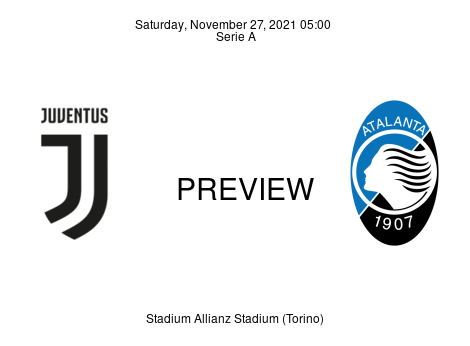 Juventus returns to Italian soil after an embarrassing defeat in Europe for this highly-anticipated fixture against Atalanta, slated for kick-off at 18:00 (GMT+1) on Saturday, November 27, at Allianz Stadium. Diving into a quick recap of how it stands ahead of Serie A Matchday 14. Lazio’s Ciro Immobile and Dušan Vlahović share the spotlight at the top of Serie A’s top scorers' chart, with 10 goals each, while Giovanni Simeone is right behind the duo with a haul of 9. The duo, Inter’s Nicolò Barella and Atalanta’s Mario Pašalić have 5 assists each, while Napoli’s David Ospina has the highest number of clean sheets, 7. Napoli remains at the top of the Serie A table, while Salernitana is rooted at the bottom.

Preview In Tuesday’s UEFA Champions League Matchday 5 fixture, Juventus were pummeled by Chelsea, 4-0, and dropped to 2nd place in UCL Group H after the humiliating defeat. Trevoh Chalobah (25’) had the opener with his maiden UEFA Champions League goal before the goals began pouring in at Stamford Bridge. With water under the bridge, the Old Lady makes her way back to Serie A, having her eyes set on three consecutive victories, DLLWW, following the 2-0 win over Lazio last weekend. - Juve's sixth win of the season: 6W, 3D, and 4L. Bonucci (23' P. & 83' P.) stepped up twice at the Stadio Olimpico and converted from the penalty spot twice for Juve. The Killer Lady remains in 8th place, having picked up 21 points, and Massimiliano Allegri aims to continue his slow but steady climb up the table. Allegri's side has picked up only 7 points out of a possible 15 in the last five games. Juventus have lost two of their first six home games this season for the first time since the 1980/81 season. A defeat here would equal their worst such total (3) after seven home games, having only done so in the 1956/57 and 1948/49 Serie A seasons. A 3—5—2 formation with Morata and Chiesa is expected on Saturday. Dybala could be making another off-the-bench appearance after the interval in this game against Atalanta. Danilo, Bernardeschi, and Giorgio Chiellini are all ruled out of this fixture.

Preview Atalanta picked up a 3-3 draw against BSC Young Boys on UCL MD5. Back in Serie A, the Bergamo-based club picked Spezia apart in a 5-2 win at the Gewiss Stadium and held on to 4th place on the Serie A table at end of MD 13. Having 25 points from 7W, 4D, & 2L, the Nerazzurri remains unbeaten in five Serie A games: DWDWW ahead of this fixture against Juventus. Gian Piero Gasperini could appear with the 3—4—3 formation, having the likely trio of Josip Iličić, Duván Zapata, and Mario Pašalić in attack. Davide Zappacosta (ankle injury) remains doubtful for this fixture.