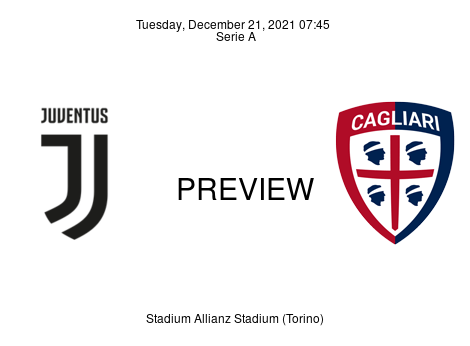 Following the comfortable 2-0 win over the Rossoblù at the weekend, the Old Lady returns for this midweek opener against the Sardinians, aiming for maximum points in a bid to break into the top-five. Juventus F.C. vs. Cagliari Calcio kicks off at 20:45 (GMT+1) on Tuesday, December 21, at the Juventus Stadium.

Preview Alvaro Morata (6’) established an early lead for Juventus at the Renato Dall'Ara, as the sleepy Bologna defense watched him sneak through a pocket of space for a vicious right-footed shot into the back of the net. Minutes after the goal, Bologna came close to finding the leveler, with an acrobatic overhead kick from Svanberg missing by inches on one occasion. However, the Rossoblù saw their influence on the game reduced before any hope of a comeback was further hampered by a remarkable 16-yard-strike from Juan Cuadrado (69’). The victory saw Juventus hold on to 7th place, having picked up 31 points from 9W, 4D, & 5L. Tied on points with 6th-placed Fiorentina and 5th-placed Roma, a win for Juventus here could see the Old Lady move into the top-five, if favorable outcomes emerge at the end of the midweek round of fixtures. Unbeaten in four games, the Girlfriend of Italy has picked up 2 points per match in the last five Serie A games: LWWDW. Allegri hopes to stretch the fine patch of white and black stripes over the Islanders when he lays out the 4—3—3 with the in-form Morata as the cutting edge of the knife in attack. Paulo Dybala failed to feature at the weekend and remains doubtful for this fixture against the Sardinians.

Preview Ten-man Cagliari failed to earn a point after a 4-0 defeat to Udinese at the weekend. A brace from Gerard Deulofeu (45’ & 69'), coupled with goals from Jean-Victor Makengo (4’) and Nahuel Molina (50'), decided the outcome of the game after ninety minutes. Failing to earn a point, Cagliari remained in the murky waters of relegation, in 19th place, with 10 points from 1W, 7D, and 10L, - three points short of safety. The Sardinians have no victory in five Serie A matches and will be returning with back-to-back defeats: DDDLL. Walter Mazarri is in desperate need of a win but may have to look elsewhere, considering the Old Lady is in fine form. Gli Isolani have appeared with the 3—5—2 formation for a major portion of the season and could be doing so once again on Tuesday. Leonardo Pavoletti and João Pedro, who have 11 goals shared between them, could form the pair in attack for this game against Juventus. Having picked up the red against Udinese, Răzvan Marin is suspended for this game.