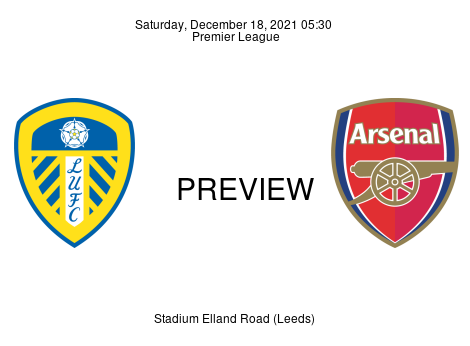 Having suffered an embarrassing 7-0 defeat to the Cityzens, the Peacocks return this weekend, hoping to find a reaction against the Gunners. Leeds United vs. Arsenal FC kicks off at 18:30 (GMT+1) on Saturday, December 18, at Elland Road.

Preview This is the worst performance in the four years, Marcelo Bielsa said in his post-match press conference after the 7-0 thrashing at the hands of Manchester City. At no moment were we able to balance the game. The sensation we gave off was that anything they attempted, we couldn't prevent, the Leeds boss added. City plays like this all the time, or similar to it, but we have never played so badly in these four years. It was not good enough. There is nothing positive to take away from our performance, a disappointed Bielsa added. I can't find anything that can be of value, he included. Goals from Phil Foden (8'), Jack Grealish (13'), and Kevin De Bruyne (32') saw City with a three-goal lead at the break, before Riyad Mahrez (49') set off another avalanche of goals after the interval. De Bruyne (62') returned for the brace before goals from John Stones (74') and Nathan Ake (78') left Leeds in the mud. With back-to-back defeats, DWDLL, Marcelo Bielsa could be staring at another defeat on Saturday, considering red-hot Arsenal are in fine form. The defeat to Manchester City saw Leeds drop a spot, from 15th to 16th place, having failed to pick up a point. Leeds have 16 points after 3W, 7D, and 7L. With a relegation battle looming on the horizon, Bielsa has promised to keep fighting until the end of the season. I always think that in adversity you have to fight, he said after the game. A 4—2—3—1 formation with Daniel James is expected from Bielsa on Saturday, as he looks to his side for a reaction.

Preview Despite being without Pierre-Emerick Aubameyang, who had been stripped of the captain's armband hours before the game, Arsenal beat West Ham 2-0 at the Emirates Stadium on Wednesday. Gabriel Martinelli (48') put Arsenal in the lead minutes after the break before Emile Smith Rowe (87') wrapped up all three points. The win saw Arsenal jump from 6th to 4th place on the Premier League table, having picked up 29 points from 9W, 2D, & 6L. Arsenal returns with back-to-back victories: WLLWW and Mikel Arteta would be looking at picking up three in a row. Arteta had kept the 4—4—1—1 formation in place over the last few games, pushing Alexandre Lacazette ahead and in place of the troubled ex-skipper, Aubameyang, while bringing in Martin Ødegaard to support the Frenchman. Barring any unforeseen circumstances, a similar shape is expected on Saturday for the game against Leeds United.