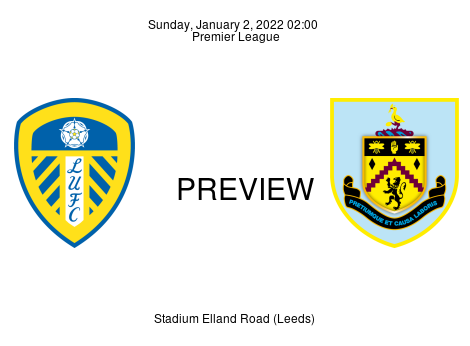 Having failed to take part in the last round of Premier League action, the Peacocks will be making their return this weekend for this bottom-of-the-table clash against the Clarets. Leeds United vs. Burnley FC kicks off at 15:00 (GMT+1) on Sunday, January 2, at Elland Road.

Preview Leeds saw the fixture against Aston Villa postponed due to a COVID-19 outbreak at the club. Following a request from Leeds United, the Premier League board met today [Sunday] and regrettably agreed to postpone the club's home fixture against Aston Villa, due to be played at 5.30 PM on Tuesday, December 28. A statement from the Premier League board read. Last time out [Saturday, December 18], Leeds United picked up a 4-1 defeat to Arsenal on home soil. The Peacocks will be returning with three defeats in a row: WDLLL, in 16th place, with 16 points after 3W, 7D, and 8L. With an injury-riddled side, Marcelo Bielsa has his eyes set on the January transfer window, which opens up this weekend. Known for his honesty, Bielsa gave a negative mid-season assessment of himself. The evaluation of my tasks in the last few months is negative, the 66-year-old Leeds boss said. The situations we’ve had to go through, I wasn’t able to resolve them as I would like, he added. It’s common in a group that three or four are missing. But when a group is missing 13 or 14, it becomes near impossible. Collectively, it’s difficult to work on tactics and improving things, but you try and get the message across with the players available, Bielsa included. Fortunately, Leeds will welcome as many as four players back to the squad for Sunday’s game against Burnley. Daniel James, Diego Llorente, and Junior Firpo are back in the squad, along with Jack Harrison. All four could form part of the 4—2—3—1 formation, which could see Daniel James in attack against Burnley.

Preview Burnley sits two spots below Leeds United, separated by five points, in 18th place. The Clarets have 11 points from 1W, 8D, and 7L, with no victory in five Premier League appearances: DDLDL. On Thursday, Burnley picked up a 3-1 defeat to Manchester United at Old Trafford. Aaron Lennon (38’) scored Burnley’s only goal, three minutes after Cristiano Ronaldo (35’) hit the back of the net for United’s third goal. A victory here could see Burnley escape the troubled waters of relegation temporarily. A 4—4—2 formation with Chris Wood and Aaron Lennon is expected from Sean Dyche on Sunday for this game against the Peacocks. Meanwhile, Maxwel Cornet remains doubtful alongside Ashley Barnes and Connor Roberts (COVID-19).