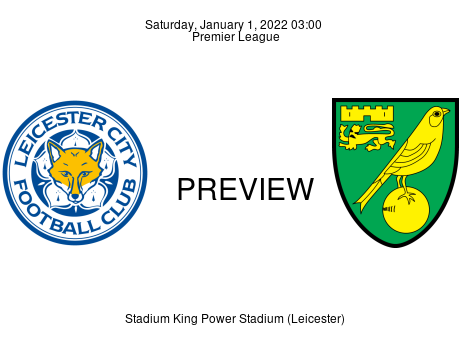 After a victory over the Reds, the Foxes take on the Canaries on New Year’s Day, hoping to pick up three points and close the gap on the top-six. Leicester City vs. Norwich City kicks off at 16:00 (GMT+1) on Saturday, January 1 at the King Power Stadium.

Preview Leicester City surprised onlookers with a narrow 1-0 win over Liverpool on Tuesday. With fifteen minutes gone on the clock, Mohamed Salah had the opportunity to put Liverpool in front from the spot. However, the Egyptian failed to convert from 12 yards before crashing the rebound into the cross-bar. Having saved the penalty, Kasper Schmeichel came up with a number of interventions to keep the Foxes in the game. A minute before the hour mark, second-half substitute Ademola Lookman (59’) swept the ball past Alisson in goal, having skipped past Matip with ease. The Foxes held on to the slim advantage until the final whistle. The players put in a heroic effort when you think of the recovery time against a team with so much power and athleticism, Brendan Rodgers said in his post-match interview after the win. You don't keep a clean sheet against Liverpool if everyone isn't working, the Leicester City boss added. I just thought, you know, let's go back to basics [with our set-piece defending]. An old school structure. Let's defend properly. We did that tonight [Tuesday], an impressed Brendan Rodgers added. The victory saw Leicester City return to winning ways, DLWLW, after the 6-3 defeat to the Sky Blues. After the game, the Foxes moved one spot ahead, from 10th to 9th place, having picked up 25 points from 7W, 4D, & 7L. A 4—3—1—2 formation with Jamie Vardy and AFCON-bound Kelechi Iheanacho in attack is anticipated for this fixture against the Canaries.

Preview Norwich City were on the receiving end of a 3-0 thrashing by Crystal Palace earlier in the week. Nesting at the bottom of the Christmas Tree in the New Year, 20th-placed Norwich returns with five straight defeats: LLLLL, while having 10 points from 2W, 4D, & 13L. The result and the scoreline hurts, Dean Smith said in his post-match interview after the embarrassing defeat. I didn't think it a 3-0 if I'm honest, but the manner of the goals we conceded was poor, he added. The Canaries have a massive negative goal difference of -34 and are a point behind 19th-placed Newcastle United. Dean Smith has a 12%-win rate following his arrival at the club, after 8 games: 1W, 2D, & 5L. An unlikely win here could spark a turnaround in fortunes in the New Year. A 4—2—3—1 formation with Adam Idah in attack is expected on Saturday. Injury and COVID-hit, Norwich could be without Pukki and a number of key players.