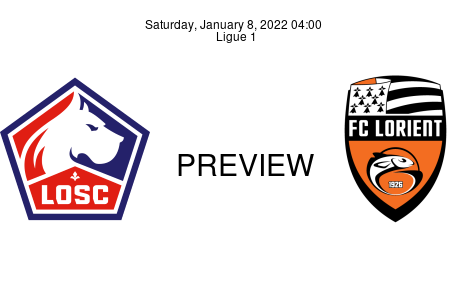 The French champions are back for their first Ligue 1 game of the new year, looking to bag three points and close the gap on the top-five. LOSC Lille vs. FC Lorient kicks off at 17:00 (GMT+1) on Saturday, January 8, at the Stade Pierre-Mauroy.

Preview In a five-goal thriller at the Nouveau Stade de Bordeaux, Lille picked up a 3-2 win over Bordeaux right before the winter break. The home side started on the front foot, finding the opener inside the first twenty minutes through Alberth Elis (17’). However, Benjamin André (33’) restored LOSC back to level terms at the Nouveau Stade de Bordeaux following a remarkable 25-yard volley. But, Elis (45’) would return for the brace, leaving Bordeaux in the lead at the break. Minutes after the interval, Burak Yilmaz (77’ P.) stepped up and converted from the spot, after a clumsy challenge on a white Lille shirt in the box. With parity restored, Lille pressed for the winner, and found it through the league's top scorer, Jonathan David (84’). The victory leaves Lille unbeaten in five Ligue 1 games: DWWDW, and saw them make the leap across the table, moving three spots from 11th to 8th place. LOSC has 28 points after 7W, 7D, and 5L. Having been knocked out of the French Cup earlier in the week following a defeat to Lens via penalties [4-3], Jocelyn Gourvennec aims to put the disappointment behind him with a win on Saturday. Known for the 4—4—2, Gourvennec, could leave Burak Yilmaz and Jonathan Bamba in attack for this fixture against Lorient. Jonathan David (COVID-19) and Benjamin André (COVID-19) are both ruled out for the weekend.

Preview Meanwhile, Lorient were held back to a 1-1 draw against ten-man PSG in their last game of the 2021 calendar year. Both sides saw a few clear-cut chances go begging in the opening minutes, with Lionel Messi hitting the woodwork on one occasion. Five minutes shy of the break, a fabulous 18-yard-strike from Thomas Monconduit (40’) left Lorient in the lead. Late in the second half, Sergio Ramos was given the marching orders after a second yellow card, leaving Lorient with the numerical advantage. However, a last-gasp effort from Mauro Icardi (90’+1) saw Lorient’s three points cut down to one. Despite the spirited performance which earned the club a point against PSG, Lorient remains in 19th place, with 16 points from 3W, 7D, & 9L. Christophe Pélissier looks to pick up at least a point against the French champions on Saturday after avoiding defeat for the first time in five games: LLLLD. A 4—4—2 formation with Nigeria’s Terem Moffi and Armand Laurienté in attack is expected. On availability, Stephane Diarra (thigh injury) and Fabien Lemoine (calf injury) are in doubt for this weekend’s fixture.