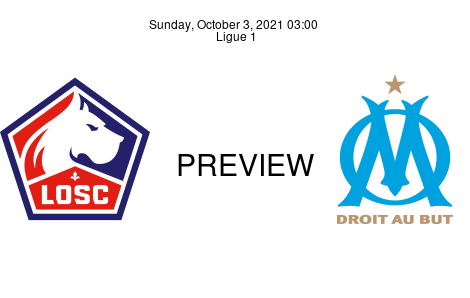 The French Ligue 1 fixture, Lille OSC vs. Olympique Marseille, kicks off at 16:00 (GMT+1) on Matchday 9, Sunday, October 3, at the Stade Pierre-Mauroy.

Preview Ligue 1 champions, Lille OSC make their return to Ligue 1, following Wednesday’s 2-1 defeat to RB Salzburg in the UEFA Champions League, with Burak Yilmaz (62’) picking up Lille’s only goal. Before the goal, Karim Adeyemi (35’ P. & 53’ P.) had struck twice from the penalty spot. We've been talking about it a lot, - our finishing isn't up to scratch, said Gourvennec, right after the 2-1 defeat to Salzburg on Thursday. It cost us two points against Wolfsburg and it was the same story tonight, he added. His words were evident in last weekend’s 2-1 win over Strasbourg at the Stade de la Meinau, which saw LOSC have seven shots on target, with only two converted. Following the win, LOSC is left with back-to-back victories in Ligue 1: WLLWW, and in 9th place while having 11 points after 3W, 2D, & 3L. On goals, Lille has 1.38 goals per game, after a haul of 11 goals in eight Ligue 1 games. Porous at the back, Lille has conceded 14 goals (1.75 goals conceded per game) and have a G.D. of -3. With heavy shoes to fill, Jocelyn Gourvennec will continue his spirited attempts to steer Lille’s title defense in the right direction. He will try again on Sunday, by utilizing another window of opportunity in the game against Marseille to pick up three points. A 4—4—2 formation with Yilmaz and Jonathan David in attack is expected from the 49-year-old.

Preview Despite having a game in hand, Marseille occupies 3rd place on the French Ligue 1 table, while having 14 points from 4W, 2D, & 1L. Marseille were not left out on the European front, picking up a goalless draw against Galatasaray in the Europa League on Thursday. Last weekend, two goals from Dimitri Payet (33’, 45+3’ P.) were not enough to salvage a point for Marseille against Lens at the Stade Vélodrome. Florian Sotoca (9' P.) handed Lens the lead in the opening minutes from the penalty spot after the VAR spotted a handball in the box before Przemyslaw Frankowski (27') curled one over a wall of three, and around the goalkeeper for the second. Wesley Saïd (71') then wrapped up the three points for the visiting Lens. The defeat was the first for Marseille on the domestic front: WWWDL. On the numbers, Les Olympiens have 14 goals after seven Ligue 1 games. An average of 2 goals scored per game, while conceding 8 goals (1.14 goals-conceded-per-match), which leaves Marseille with a G.D. +6. Jorge Sampaoli’s 3—3—3—1 formation could see Bamba Dieng at the top of the shape on Sunday.