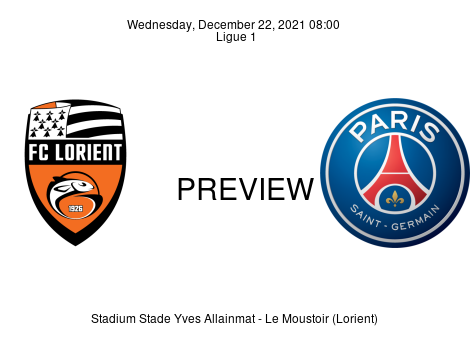 Preview On Saturday, Lorient picked up a 1-0 defeat to Rennes in the French Cup at the Stade de la Route de Lorient. Back in Ligue 1, the home side will be returning with five consecutive defeats, LLLLL, having lost to FC Metz, 4-1 on Matchday 18. The defeat saw the club tumble three spots off the league table, from 16th to 19th place, having failed to pick up a point. In total, Lorient have picked up 15 points after 3W, 6D, and 9L. Under pressure, coach Christophe Pélissier will be desperate for at least a point, knowing that a victory over PSG would require nothing short of a miracle, given his side’s torrid form. - Not to mention the unimpressive numbers at both ends of the pitch. Lorient are unable to create much upfront, averaging less than 1 goal per 90 minutes, 0.78 g/g, having scored 14 goals in 18 Ligue 1 games. At the other end, the club has conceded 30 goals (1.67 goals conceded per game) and has a massive negative goal difference of -16. Pélissier went with the 5—4—1 formation against Metz, leaving the Nigerian, Terem Moffi, in attack. A similar shape may be seen for this fixture against PSG.

Preview Meanwhile, PSG are coming off the back of a 3-0 win over SC Feignies in the French FA Cup. I am happy that we have made it through to the next round, which is good, Mauricio Pochettino said in his post-match interview. It was a very professional performance, and we deserved it. Yes, of course, we have qualified for the Champions League [round-of-16], we are first in Ligue 1 and are now through to the next round of the Coupe de France, and this is so important, he added. On Matchday 18, PSG swept Monaco aside with relative ease in a 2-0 win. A brace from Kylian Mbappe (12’ P. & 45’) was enough to decide the outcome of the game after ninety minutes. With 45 points from 14W, 3D, and 1L, Les Parisiens sits at the very top of the Ligue 1 table, 13 points clear of the nearest rivals, 2nd-placed Marseille [32 points]. Prior to this match against Lorient, the nine-time Ligue 1 champions are unbeaten in five Ligue 1 games: WWDDW. On Wednesday, Mauricio Pochettino hopes to extend the blue patch of unbeaten run over Les Merlus. A 4—3—3 formation with Messi, Icardi, and Di Maria in attack is anticipated. Unfortunately, PSG will be without Mbappe and Marco Verratti, who are both suspended. Meanwhile, Neymar Jr. remains ruled out until next year.