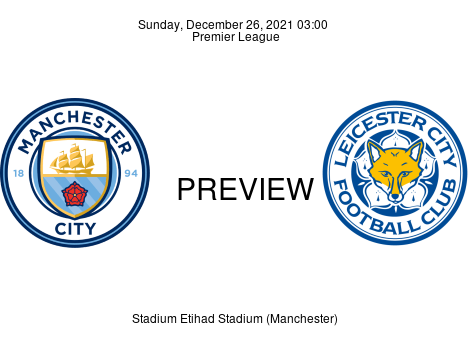 Having swept the Magpies aside with relative ease, the Cityzens return for this fixture against the Foxes, looking to remain at the top of the Christmas tree in the New Year. Manchester City vs. Leicester City kicks off at 16:00 (GMT+1) on Sunday, December 26, at the City of Manchester Stadium.

Preview Manchester City were on the end of a 4-0 win over Newcastle United last weekend at Saint James’ Park. Rúben Dias (5’) put City in front with an easy header in the first five minutes into the game, before Joelinton had a go at it at the other end, and failed to find the mark. Minutes later, a fabulous solo effort from João Cancelo (27’) was capped off with an 18-yard-strike, leaving Manchester City with a two-goal lead. Mahrez (64’) had initially seen his remarkable left-footed volley ruled off by the flag, but was left celebrating twice after the VAR adjudged him to be onside. Raheem Sterling (86’) made it four with four minutes left on the clock as the Cityzens wrapped up all three points. Following the win, the Sky Blues have five victories in a row, WWWWW, and remain at the top of the Premier League table, three points clear of their closest rivals, Liverpool [41 points]. The Premier League champions have 44 points from 14W, 2D, & 2L, and a win here would see them stretch their lead to six points, with Liverpool’s Boxing Day game against Leeds United postponed. Pep dropped the 4—3—3 for a 4—2—3—1 formation against the Magpies, leaving Gabriel Jesus in attack while keeping Kevin De Bruyne right behind him. A similar shape may be seen on Boxing Day for the game against Leicester City. Meanwhile, the club will not sign an out-and-out center forward next month despite the imminent departure of Ferran Torres. We won't bring in a striker in January, Guardiola said. It [Torres’ departure to Barcelona] is not done officially. I know they are negotiating, it's close, that's all, he added.

Preview Meanwhile, Leicester City crashed out of the EFL Cup on Wednesday, having lost by penalties to Liverpool in the quarter-final. Back in the Premier League, the Foxes had two of their fixtures postponed due to the COVID outbreak. Leicester City remains in 9th place on the Premier League table, having picked up 22 points from 6W, 4D, & 6L. The Foxes will be returning with the form: LWDLW, ahead of this fixture against Manchester City, and an unlikely win here would see the club remain inside the top ten. Brendan Rodgers and the Foxes could appear with the 4—3—1—2 formation, having Patson Daka and Jamie Vardy in attack.