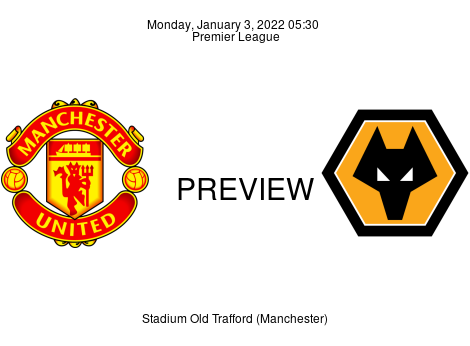 Having swept the Clarets aside with relative ease, the Red Devils are back for another round of Premier League action, looking to pick up three points and close the gap on the top-four. Manchester United vs. Wolverhampton Wanderers kicks off at 18:30 (GMT+1) on Monday, January 3, at Old Trafford.

Preview On Thursday, Manchester United picked up a 3-1 win over Burnley at the Theatre of Dreams. Unimpressive images had emerged from Ralf Rangnick’s 4—2—2—2 formation following the 1-1 draw against Newcastle last Monday. After the draw, the 63-year-old made six changes to the side and switched to a 4—4—2 formation for the game against Burnley. Ronaldo had fired well above the crossbar, much to the disgust of the interim manager in the opening minutes. But minutes later, Scott McTominay (8’) fired United in front with an 18-yard strike. Burnley's Ben Mee (27’ O.G.) got the final touch on Jadon Sancho’s effort, leaving the Red Devils with a two-goal lead. Having been denied the goal, Sancho set up Scott McTominay for another effort on goal, which crashed off the woodwork following Wayne Hennessey’s intervention. But the predatory instincts of Cristiano Ronaldo (35’) saw him well placed for the side-footed tap-in. Three minutes later, Aaron Lennon (38’) pulled one back for Burnley. It was about fresh legs, fresh energy, fresh bodies, Ralf Rangnick said in his post-match interview. Therefore, it was important to me to have six fresh players on the pitch, he added. We played in a 4—4—2 defensively and a 4—2—4 offensively, and therefore it was important to have him [Scott McTominay] and Nemanja [Matic] as the two sixes playing next to each other. United’s interim boss added. The Red Devils are unbeaten in five Premier League games, WWWDW, and are now in 6th place, level on points with 5th-placed West Ham. United have 31 points from 9W, 4D, and 5L. After the Red Devils' brilliant performance against the Clarets, Ralf Rangnick could decide to keep the 4—2—2—2 formation out and adopt the same tactical strategy used against Burnley for this fixture against Wolves. A Ronaldo-Cavani partnership could be seen again on Monday. Having played through pain due to an ankle injury, Scott McTominay remains doubtful for this fixture against Wolves.

Preview Meanwhile, Wolves failed to take part in the last round of Premier League action as they had their fixture against Arsenal rescheduled to a later date due to an outbreak of COVID at the club. Match rusty, having last played on the 19th of December, Wolves are looking to shake off the COVID-induced dust. They remain in 8th place on the Premier League table, having picked up 25 points from 7W, 4D, and 7L. Wolves have the form: DLLWD ahead of this fixture against Manchester United, and Bruno Lage could line up with the 3—5—2, leaving Raúl Jiménez and Daniel Podence in attack.