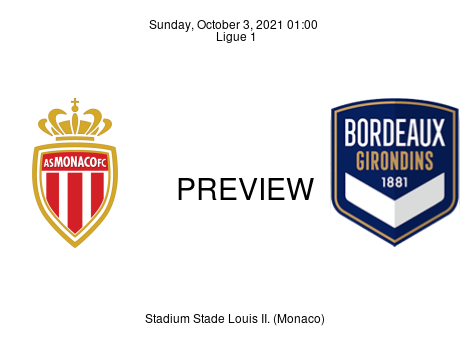 Preview AS Monaco were held in a 1-1 draw against Real Sociedad in Thursday's UEFA Europa League fixture at the Reale Arena. Last weekend, Niko Kovac’s side completed the comeback to put the newcomers, Clermont Foot, away in a 3-1 win at the Stade Gabriel Montpied. It was the first-ever meeting between the two sides in the French top-flight division. Mohamed Bayo (7’) put the home side ahead with a fantastic effort from close range. Minutes later, Wissam Ben Yedder (25’) rounded the keeper before restoring equality on the scoresheet. Three minutes after the break, Kevin Volland (48’) gave Monaco the lead, before Sofiane Diop (90+1’) wrapped up the three points at the death. After back-to-back victories, WLDWW, Niko Kovac’s side hopes for a third on Sunday against Bordeaux. AS Monaco is in 8th place, with 11 points after 3W, 2D, & 3L and a win could see the club move into the top-six. Monaco’s average goal ratio is 1.38 goals scored per game, which leaves the club with a haul of 11 goals after eight Ligue 1 games. Monaco have failed to keep a clean sheet this season and have conceded a total of 11 goals (1.38). A 4—3—3 formation with Wissam Ben Yedder or Kevin Volland playing through the middle is expected against Bordeaux on Sunday.

Preview Bordeaux remains at the lower end of the French Ligue 1 table, in 16th place, while having a point above the bottom three. On Matchday 8, Bordeaux picked up a point in the 1-1 draw against Rennes on home turf, leaving the club with 7 points from 1W, 4D, & 3L. The club returns with the form: LLWDD ahead of this fixture against Monaco. Bordeaux has 11 goals and an average of 1.38 goals scored per game. However, Les Girondins have conceded 17 times and have a goal difference of -6. An average of 2.12 goals-conceded-per-match. Vladimir Petkovic's probable 3—4—2—1 formation could see Ui-jo Hwang at the top of the design. Hwang is Monaco’s top scorer with 3 goals in 7 appearances for the club this season. Coupled with one assist, he has a 36% goal participation in all episodes that have led to a goal for Bordeaux. The special month of October will see Bordeaux celebrate their 140th anniversary. And the club promises a team of legends for a special charity match after the game on Sunday, October 17, against Nantes at the Matmut Atlantique.