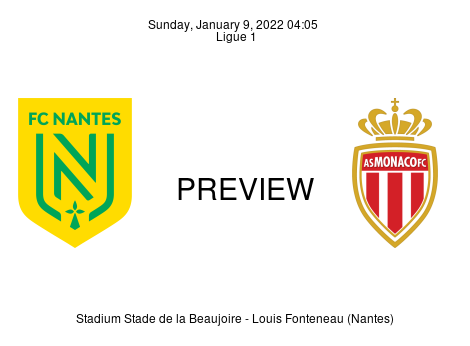 Preview Nantes picked up three victories in a row, DLWWW, following the narrow 1-0 win over St-Étienne at the Stade Geoffroy-Guichard right before the winter break. The Yellow House started on the front foot but failed to hit the back of the net in the first forty-five despite several clear-cut chances. However, it was St-Étienne who emerged as the dominant side after the break. It appeared both sides were heading for a draw until a remarkable solo effort from Kolo Muani (83') saw him leave four opposing green shirts behind for the only goal of the game. The victory saw La Maison Jaune move three spots up the Ligue 1 table, from 10th to 7th place, having picked up 28 points from 8W, 4D, and 7L. The Canaries flew into the next round of the French Cup last Sunday, following a comfortable 2-0 win over AS Vitré in the round-of-32. Antoine Kombouaré aims to build upon the impressive win by picking up at least a point on Sunday against Les Monégasques. A 4—1—4—1 formation is expected from Kombouaré, with Renaud Emond at the top of the shape for this fixture against Monaco. Nigeria’s Moses Simon has departed for the Africa Cup of Nations, alongside three others, while Randal Kolo Muani has been ruled out of this weekend’s game with a foot injury.

Preview AS Monaco returned to winning ways following the 2-1 win over Rennes in their last game of the 2021 calendar year. Martin Terrier (16') put Rennes in the lead inside the first twenty minutes. However, Wissam Ben Yedder (35' P.) restored parity from the penalty spot at the Stade Louis II, ten minutes before the stroke of half-time. Minutes into the second forty-five, Kevin Volland (72') put AS Monaco in the lead, having appeared out of nowhere for the header which left the goalkeeper, Alfred Gomis, watching. With the win, the club moved two spots up the table, from 8th to 6th place. Separated from Nantes by only a point, AS Monaco has 29 points from 8W, 5D, and 6L. Monaco will be coming off the back of a 3-1 win over US Quevilly-Rouen Métropole in the French FA Cup, round-of-32. Niko Kovac and Les Monégasques could adopt the 4—2—3—1 formation, with Wissam Ben Yedder at the top of the design for this fixture against Nantes. Injury-hit, COVID-decimated Monaco could be without as many as ten players, with six of them having tested positive for COVID-19.