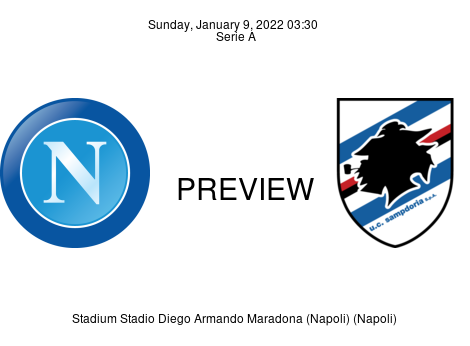 Preview Napoli were held back in a 1-1 draw against Juventus on Thursday at the Allianz Stadium. Napoli's all-time top scorer, Dries Mertens (23'), helped the club to the lead inside thirty minutes. Quick and intelligent passes around the midfield saw Napoli contain Juventus for the remaining portion of the game, preventing the Old Lady from finding the leveler in the first forty-five. However, a more dominant Juventus emerged after the break and eventually found the equalizer through Federico Chiesa (54’), six minutes short of the hour mark. Despite a few clear-cut chances at both ends of the field, both sides failed to find the back of the net for a second time and had to settle for a point. The draw leaves Napoli without a victory in two Serie A games: LLWLD and in 3rd place, five points behind second-placed AC Milan, while having 40 points from 12W, 4D, & 4L. Decimated by injuries, COVID, and suspensions, not to mention player unavailability due to AFCON, the Partenopei were missing as many as nine players. - Including Spalletti who was not at the dugout after testing positive for Coronavirus earlier in the week. With Victor Osimhen doubtful due to COVID, Dries Mertens is expected to continue as a false 9 in Luciano Spalletti’s 4—2—3—1 formation. Andre Zambo Anguissa, Kalidou Koulibaly, and Adam Ounas have all departed for Cameroon to take part in the Africa Cup of Nations.

Preview Sampdoria picked up a 2-1 defeat to Cagliari on Thursday, despite taking the lead inside the first twenty minutes at the Stadio Luigi Ferraris. Gabbiadini (18') had La Samp in the lead at the end of the first forty-five. However, ten minutes after the interval, Alessandro Deiola (55') restored the Sardinians back on level terms. Minutes into the second half, Pavoletti (71') handed Cagliari the lead until full-time. Sampdoria remains in 15th place on the Serie A table, with 20 points from 5W, 5D, & 10L, and are without a win in three Serie A games: LWDDL, ahead of this fixture against Napoli. For the game against Cagliari, Roberto D’Aversa adopted the 4—4—2 with Caputo and Manolo Gabbiadini in attack. He is expected to stick with the same shape on Sunday, when La Samp takes on Napoli in what will be their second Serie A appearance of the new year. Antonio Candreva picked up a straight red against the Sardinians and will not take part in this fixture. In addition, Omar Colley has left for the Africa Cup of Nations in Cameroon, while two COVID cases have been reported in the squad.