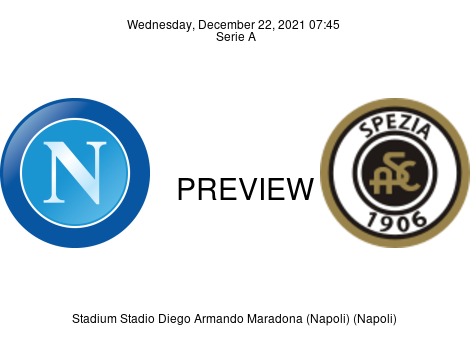 Preview Napoli moved into 2nd place following the 1-0 win over title rivals AC Milan at the weekend. Luciano Spalletti had chosen to go for the physical presence of the former Milan player, Andrea Petagna, and left Dries Mertens, who had been filling in for the injured Osimhen, in attack on the bench. Five minutes into the game, Elif Elmas (5’) peeled off his man for the header, off a corner kick, leaving Napoli in front. AC Milan tried to find the leveler but never really got into the game for the entire length of the first forty-five. Late in the second period, Napoli were let off the ropes after Kessie's would-be equalizer was chalked off for offside following a VAR review. The narrow victory saw Napoli return to winning ways after two defeats in a row: WDLLW. So far, Napoli has amassed 39 points from 12W, 3D, and 3L. Spalletti now aims for two victories in a row. However, an unimpressive record trails the club ahead of this mid-week fixture against Spezia. Napoli have not won any of the last eight Serie A games played on Wednesday (0W, 4D, & 4L). The Partenopei last won on this day of the week seventeen months ago, in July 2020. A 4—2—3—1 formation with Mertens returning to the starting lineup to lead the attack is expected from Luciano Spalletti for this game against Spezia.

Preview Spezia picked up a point in the 1-1 draw plagued by two own goals at the Alberto Picco over the weekend. Spezia were on the back foot right after kick-off, leaving Empoli to do the attacking, as the visitors made intelligent passes through pockets behind the Spezia backline. However, resilient defending kept Spezia from conceding in the first forty-five. Five minutes after the break, an own goal from Riccardo Marchizza (50’ O.G) saw Spezia take the lead. But, minutes later, another bizarre own goal, this time from Dimitris Nikolaou (71’ O.G.), restored parity at the Alberto Picco. The draw leaves Spezia in 17th place with 13 points from 3W, 4D, & 11L. The club remains without a win in five Serie A games, LLDLD, and a win here for Thiago Motta looks unlikely. A 3—5—2 formation with M'Bala Nzola and Rey Manaj posing as the attacking duo is anticipated for this game against Napoli. On availability, Daniele Verde and Eddie Salcedo are in doubt for this fixture, while Jacopo Sala is ruled out until next year.