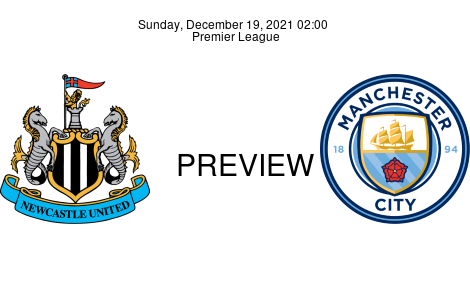 With another embarrassing defeat to the Reds during the mid-week round of fixtures, the Magpies return in search of an unlikely win against the Cityzens on EPL Match Week 18. The Premier League fixture, Newcastle United vs. Manchester City, kicks off at 15:00 (GMT+1) on Sunday, December 19, at St. James’ Park.

Preview A 3-1 defeat to Liverpool on Thursday saw Newcastle’s hopes of escaping from the murky waters of relegation dashed once again. A well-executed counterattack saw Jonjo Shelvey (7’) go looking for trouble, having bagged the opener with a fabulous 20-yard strike. Minutes later, Diogo Jota (21’) found the leveler under controversial circumstances. Newcastle's Isaac had gone down in the box, holding his head, but Liverpool chose to go on. Moments later, a loose back-pass left Sadio Mane with a golden opportunity to find the net. However, it was Salah (25') who managed to finish off after an initial rebound off the goalkeeper. And then, a moment of real magic from Trent Alexander-Arnold, in the shape of a 25-yard-stunner, which saw the referee, Mike Dean, scampering for safety as the ball zeroed in on target. I'm really disappointed with Liverpool's first goal, Howe said in his post-match interview. I need to see it again, but it was clear to me that Isaac went down holding his head immediately. In my opinion, the game should have been stopped, he added. It was the first defeat for Eddie Howe’s side after a draw and a win: DLDWL. Newcastle remains in 19th place with 10 points after 1W, 7D, and 8L, and Howe and the Magpies could appear with the defensive 4—5—1 formation, leaving Callum Wilson in attack for this game against Manchester City.

Preview A remarkable seven goal-haul saw Manchester City sweep Leeds United aside with relative ease at the City of Manchester Stadium. Impressed, Pep had a few fine words for Kevin De Bruyne. Kevin trained well the last two days, Pep said after the Belgian bagged a brace in the game against Leeds. Against Wolves, he lacked rhythm, but it is not easy to come back [after Covid-19]. In these types of games that are a bit more open and they put a lot of players in front, Kevin is the best, Pep included. The victory saw Manchester City remain in 1st place on the Premier League table, 3 points clear of title rivals Liverpool. City has picked up 41 points from 13W, 2D, & 2L and will be returning with five straight victories: WWWWW. Having preferred the 4—3—3 over the course of the season, the relatively new 4—2—3—1 formation he adopted against Leeds United in the seven-goal thrashing of Marcelo Bielsa’s side could remain in place. City has no new injury worries ahead of this fixture against the Magpies.