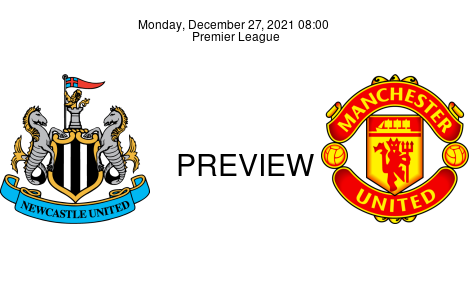 After taking a haul of four, the Magpies return for this Boxing Day fixture against the Red Devils, hoping to finish the year on a high. Newcastle United vs. Manchester United kicks off at 21:00 (GMT+1) on Monday, December 27, at St. James' Park.

Preview Newcastle United picked up a 4-0 defeat to Manchester City last weekend on home soil. Rúben Dias (5’) put City in front with an easy header in the first five minutes of play. Newcastle’s Joelinton had a go at the other end but failed to find the mark by inches. Minutes later, a fabulous solo effort from João Cancelo (27’), afforded the Portuguese the opportunity to make a fine 18-yard-strike, which rattled the back of the net, to leave Manchester City with the two-goal lead. Mahrez (64’) had initially seen his remarkable left-footed volley ruled off by the flag but was left celebrating for a second time after the VAR adjudged him to be onside. Minutes later, the Magpies found themselves four goals behind after Raheem Sterling bagged Manchester City’s fourth goal in the 86th minute. The defeat leaves Newcastle with three losses in a row: DWLLL, and in 19th place, having picked up 10 points after 1W, 7D, & 10L. Relegation-threatened, Eddie Howe’s side have won only one league match all season and are working on a January transfer list to turn things around at the club. According to reports from Sky Sports, the Nigeria international, Odion Ighalo, has been identified as a potential transfer target. On Monday, Eddie Howe must find a way to keep it tight at the back to nurse any hope of escaping with a point against the Red Devils. Newcastle United conceded 79 Premier League goals in 2021, the joint-most in a single calendar year in the competition, alongside Ipswich Town in 1994. Howe could use the defensive-minded 4—5—1 formation, leaving Callum Wilson in attack for this game against Manchester United.

Preview The Red Devils slipped one spot down on the Premier League table, from 5th to 6th place, having failed to take part in the last round of Premier League action. Manchester United had their fixture against Brentford [Tuesday, December 14] postponed in the wake of the COVID outbreak. United have 27 points from 8W, 3D, & 5L, and will be returning behind three straight victories, LDWWW. Ralf Rangnick is leaving no stone unturned to ensure the Devils are in the right frame of mind during this season of Christ's celebration. The 63-year-old recently endorsed the appointment of a sports psychologist at the club. You have so many experts to help players develop, so why should you exclude this area? It is not logical, the German professional football manager said. Rangnick will be looking to see his side extend their remarkable goal-scoring form against the Magpies. Manchester United have scored 112 Premier League goals against Newcastle. A record high in the league, along with Arsenal’s 112 goals vs. Everton. The now-famous 4—2—2—2 formation will be seen again, with Ronaldo and Rashford in attack.