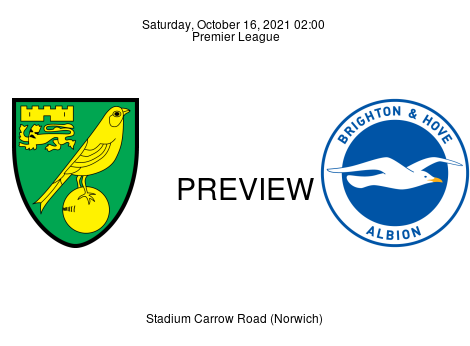 The Premier League fixture, Norwich City FC vs. Brighton & Hove Albion FC, kicks off at 15:00 (GMT+1) on Saturday, October 16, at Carrow Road. Referee Peter Bankes will be in charge while the assistants, Neil Davies and James Mainwaring will lend a helping hand. Graham Scott will be at the controls in the VAR room.

Preview Norwich City picked up their very first point of the season in the game against Burnley on Matchday 7 at Turf Moore, ending their 16-match losing streak in the English top-flight division. However, the club remains firmly rooted at the bottom of the table, in 20th place. Despite the position, the draw is a step in the proper direction for Daniel Farke’s side after four straight defeats: LLLLD. With no victories in seven games (0W, 1D, & 6L.), Farke aims to utilize the draw as a springboard for a much more promising result against the Seagulls on Saturday. However, the numbers tell a different story. The Canaries are unable to create anything promising in the final-third, remaining with the worst goal-scoring average in the league: 0.29 goals per game, having netted only twice in seven Premier League appearances. It comes as no surprise that the Canaries remain at the bottom of the table, having let in 16 goals (an average of 2.29 goals conceded per game), leaving the club with a goal difference of -14. Farke is expected to stick with the 3—5—2 formation once again for this game against the Seagulls, knowing three points against Albion could spark a turnaround in fortunes. The American international, Josh Sargent, is expected to partner Teemu Pukki in attack on Matchday 8 when the Seagulls come calling at Carrow Road. Pukki was on target for Finland in the 2-1 defeat to Ukraine and aims to extend the goalscoring form to the Premier League.

Preview Brighton & Hove Albion continue to enjoy a fine start to the season, sitting comfortably in 6th place on the Premier League table following the goalless draw against Arsenal on Matchday 7. The club has picked up 14 points after 4W, 2D, & 1L. With eight goals after seven Premier League games, Brighton have managed to remain in the top-ten with an average of 1.14 goals scored per game, while keeping it tight at the back, conceding an average of only 0.71 goals-per-match. The Seagulls have netted five times and have a G.D of +3. Unable to believe his eyes, Graham Potter will look to extend the remarkable run which leaves his side unbeaten in four Premier League games: LWWDD. Sharing the name of a wizard, he is expected to mirror the magical 3—5—2 formation which has brought unprecedented results for his side this season. Potter wouldn't be worried about goals with Neal Maupay in fantastic form, having scored four in seven appearances. - Contributing 50% to all goal-scoring efforts for the club this season.