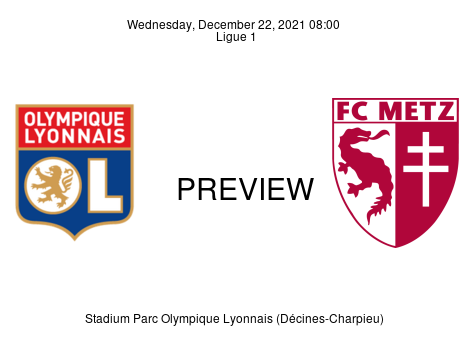 The French Ligue 1 fixture, Olympique Lyon vs. FC Metz, kicks off at 21:00 (GMT+1) on Wednesday, December 22, at the Parc Olympique Lyonnais.

Preview Lyon’s trip to Paris FC last Friday saw their French FA Cup last-64 tie abandoned due to another infamous fan invasion. Fans from both sides of the divide threw flares and occupied the turf at halftime, forcing the referee and players to return to the dressing room at halftime. Despite repeated calls, calm failed to return, and the game was eventually suspended, with both sides level at 1-1. Back in Ligue 1, Lyon picked up a goalless draw against Lille OSC on Matchday 18 at the Stade Pierre-Mauroy. The draw saw Lyon drop one spot lower on the Ligue 1 table, from 12th to 13th place. The Kids will be returning with two draws in a row: LWLDD, and Peter Bosz will be eager to restore Les Gones back to winning ways, despite the crisis rocking the club. With the imminent departure of sporting director Juninho on the horizon, Lyon will have to find a suitable replacement to fill the huge gap at the helm. It is better for the club to already prepare for the future, and I also want to stop, Juninho said days ago. Lyon has 23 points after 6W, 6D, and 5L, while having a game in hand. With several players back to full fitness, Peter Bosz could utilize the 3—4—1—2 formation with Slimani and Dembele in attack for this fixture against Metz.

Preview Metz bagged all three points after defeating FC Lorient, 4-1, on Matchday 18. Goals from Matar Sarr (5'), Farid Boulaya (19'), Niane (80'), and an own goal from Moritz Jenz (9' O.G.) decided the outcome of the fixture. The huge victory saw the club move one spot ahead on the league table, from 19th to 18th place, having picked up 15 points from 3W, 6D, & 9L. Metz has a form that reads: DWLLW, ahead of this fixture against Lyon. Focusing on the numbers, the club has 22 goals (1.22 goals scored per game) after 18 Ligue 1 games. Meanwhile, Les Grenats have conceded 38 goals (2.11 goals per match) so far this season, the third-highest in the league, and have a goal difference of -16. Frédéric Antonetti’s attacking 4—2—3—1 formation could see Ibrahima Niane in attack once more. Niane has hit the back of the net only twice this season and will be on the hunt to extend his tally come Wednesday.