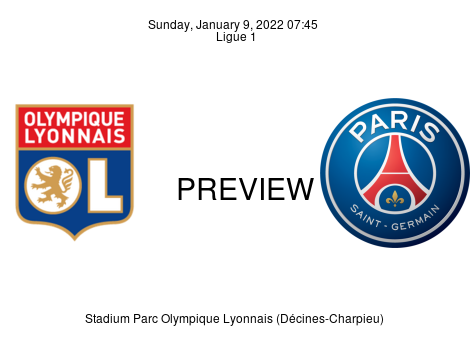 The Ligue 1 fixture, Olympique Lyon vs. Paris Saint-Germain, kicks off at 20:45 (GMT+1) on Sunday, January 9, at Groupama Stadium.

Preview Lyon picked up a 1-1 draw against FC Metz right before the winter break on home soil. Both sides failed to hit the back of the net before the interval, despite several clear-cut chances at both ends. In need of a goal, Lyon made three changes at the break, bringing in Bruno Guimarães, Rayan Cherki, and Karl Toko Ekambi. Ten minutes after the triple substitution, Lyon took the lead through a towering header from Castello Lukeba (56'). However, Lyon’s lead lasted only two minutes as the Malian, Boubacar Traoré (58’), restored parity at the Parc Olympique Lyonnais with a well-composed finish. Two second-half substitutes in the shape of Bruno Guimarães and Ekambi combined as they went in search of the winner, but the latter failed to convert. Lyon had to settle for their third draw in five Ligue 1 games: WLDDD, and remained in 13th place, having picked up 24 points from 6W, 7D, and 5L. In the first half of the season, Lyon conceded as many goals as they scored, netting 26 goals [1.44 g.p.g.] in 18 Ligue 1 games. With Lyon trailing the top-ten section by two points, Bosz aims to see those numbers improve with three points against PSG on Sunday. An unlikely win against Les Parisiens could see Les Gones jump a few spots ahead on the table if other favorable outcomes emerge at the end of the weekend. A 3—4—2—1 formation with Moussa Dembélé in attack is expected from Peter Bosz for this fixture against PSG.

Preview Ten-man PSG salvaged a point in the 1-1 draw against FC Lorient in their last game of the 2021 calendar year. Both sides failed to convert several clear-cut chances in the opening minutes, with Lionel Messi hitting the woodwork on one occasion. Five minutes before the interval, a remarkable 18-yard-strike from Thomas Monconduit (40’) saw Lorient take the lead. Late in the second half, Sergio Ramos was shown a second yellow, leaving PSG numerically disadvantaged. However, a last-gasp effort from Mauro Icardi (90’+1) saw PSG salvage a point. The nine-time French champions remain at the top of the Ligue 1 table with 46 points, 13 points clear of their closest rivals, OGC Nice. Les Rouge-et-Bleu have 14W, 4D, & 1L, after 19 Ligue 1 appearances and remain unbeaten in the last five: WDDWD. Mauricio Pochettino’s 4—3—3 formation against Lyon could see Mbappe, who was the subject of a €50M bid from Madrid, at the focal point of attack. The injury-hit, COVID-ravaged PSG could be without as many as eight other players. Angel Di Maria and Julian Draxler will miss Sunday’s fixture having recently tested positive for COVID-19, while Bernat and Lionel Messi recently returned to training following negative PCR tests.