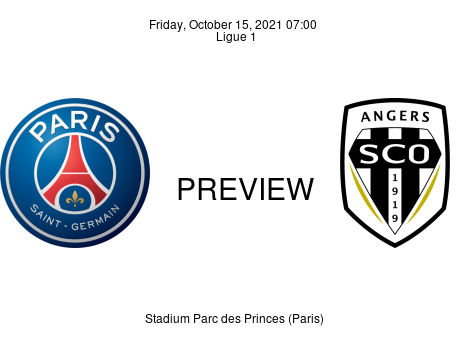 Preview Following the 2-0 loss to Stade de Rennais at Stade de la Route de Lorient, PSG will look to get back on track when they host Angers at the Parc de Princes this weekend. Goals from Gaetan Laborde (45') and Flavien Tait (46') left the nine-time Ligue 1 champions with their first defeat of the season: WWWWL. However, PSG remains in 1st place, having picked up 24 points after 8W, 0D, & 1L. Mauricio Pochettino's side has the best goal-scoring ratio in the league with 2.44 goals per game, having scored 22 goals in just 9 Ligue 1 games. Despite conceding 9 goals (1 goal conceded per game), Le Parisiens also have the best G.D. on the league table, +13. A win for PSG would leave the Paris-based side in their best shape ahead of the UEFA Champions League fixture against RB Leipzig on Tuesday, not to mention the game against Marseille on Matchday 11. Recently handed a boost with the return of Sergio Ramos to the squad, Mauricio Pochettino will have several options for the probable 4—2—3—1 formation. Mbappe, who grabbed the winner for France in the UEFA Nations League final against Spain, is expected to lead the attack on Friday. Messi could be behind the UEFA Nations League winner, while playing alongside Neymar and Di Maria. With the exception of Di Maria, the trio was shortlisted for the Ballon d'Or (2021) alongside Italy's Gianluigi Donnarumma.

Preview Angers picked up a hard-fought 3-2 victory over FC Metz on home soil before the break. It was their first victory in five games: DLDDW, and it keeps the club in 4th place with 16 points after 4W, 4D, & 1L. The club has 14 goals after nine Ligue 1 games, an average of 1.56 goals scored per game. Furthermore, Les Noirs et Blancs have conceded 9 goals (1 goal-conceded-per-match) so far and have a goal difference of +5. A point for Gérald Baticle's side would be a fine result ahead of a technically easier fixture against St-Etienne on Matchday 11. Baticle could go with three at the back once again in a 3—4—1—2 formation. The defensive trio will have their worries about trying to keep Mbappe quiet, while Messi, who struck the crossbar with a fine freekick against Rennes, will pose a different kind of threat from set-pieces. Meanwhile, Jimmy Cabot, with four assists, will be aiming for his fifth on Friday.